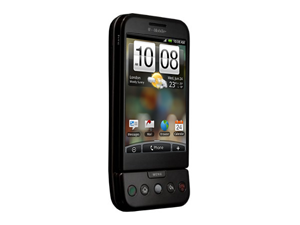 There is little doubt as to what it is in the HTC Hero that has people drooling. Â It’s the HTC flavored “Sense” UI built on top of Android 1.5 that gets most of the “Oooohs” and “Ahhhhs”, not the form factor.

While the handset is slimmer than the G1, it basically has the same overall design sans keyboard. Â It’s pretty hard being a G1 owner and not getting jealous when you see just what a difference a little customization makes. Â Surely there must be something for us early adopters who want to jazz up their handsets with a little Sense. From the sounds of it, HTC just might make it available to other Android devices.

Speaking to Pocket-Lint today after the Hero announcement, HTC CEO Peter Chou was quoted saying, “HTC sense will be available on some other existing devices.” Â Anyone following Android can tell you that there are only two other devices out there floating around. Â Yeah, we know there are multiple names for each but they’re fundmentally the same two phones all over the world.

One thing going for us G1/myTouch 3G users is the fact the hardware in all three phones is almost the same across the board. Â If it runs well on the Hero, it ought to run well on the G1. Â At least that’s the theory.