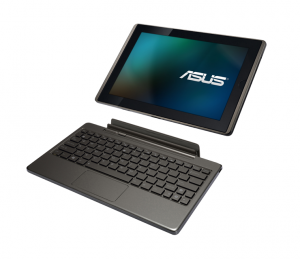 According to ASUS, their Eee Pad Transformer is doing very well for itself – to the tune of 400,000 units shipped in the first half the year.  The 10-inch tablet runs Honeycomb, carries at $399 price tag and is said to be a low-margin device.  Instead of making a bunch of money up front on the tablet, ASUS is picking up margin dollars on the back end with their keyboard docking station. Fair enough.  We’re down with that any day of the week.  So what’s in the future for the company?  How about a quad-core, Ice Cream Sandwich-running tablet just a few months from now?

DigiTimes is reporting today that the company is prepping a second-generation tablet for launch as soon as October 2011.  But wait, there’s more!

In addition to the second-generation Eee Pad Transformer, Asustek will also sell its Eee Pad Slider in July, priced between US$650-800, 7-inch Eee Pad MeMO 3D in the fourth quarter and Padfone, using Android (Ice Cream Sandwich) and Nvidia Tegra 3 with a price range between US$549-799. All Asustek’s tablet PCs are manufactured by Pegatron Technology