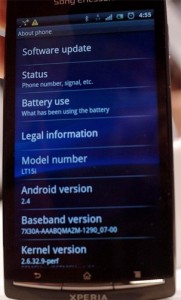 Editors Note: Also of note about this story is the fact that the original author, Arnoud Wokke, pointed out that he came across this handset at CES.  He was on the show floor, and he claims that someone gave him this phone by mistake for a hands on.  He quickly snapped a picture and points out that the version of the software he saw was by no means final.  Another “accidental” leak, or the real thing?

It looks like Gingerbread isn’t fully out of the oven yet! Tweaker.net posted an article detailing a hands-on with a Sony Experia Arc that was running an unannounced Android 2.4!

It is unknown what is or isn’t in this version of Android, but we could quite possibly see a similar situation that occurred about a year ago with Eclair. Eclair launched with Android 2.0 on the Motorola Droid in late 2009, and in January 2010, the Nexus One was released with Eclair again, but this time it was powered by Android 2.1. The Sony Experia Arc is running a custom skinned version of Android 2.4, so there is no easy way to figure out what features are added in the stock build of Android 2.4. The is devices software is also in early stages of production, which also means that Android 2.4 might not even be finished yet.

It needs to be noted that the info was translated from a Dutch page.  We are also looking for confirmation from other sources on this, but it pretty cool to see!