Remember the HTC Desire EYE smartphone which launched back in 2014? Well, it looks like the Taiwanese company is looking to bring back the “EYE” naming scheme. Well sort of.

According to reliable leakster, @evleaks HTC is gearing up to unveil a new handset dubbed the U11 EYEs. This is the same device previously known as the HTC Ocean Harmony which recently received CCC certification in China.

The upcoming HTC Harmony will come to market as the, ahem, HTC U11 EYEs.

The HTC Desire EYE got its name from the large centrally-positioned 13-megapixel selfie camera on the front, so it could be assumed the HTC U11 EYEs branding could signal the presence of a dual-camera setup up front.

While we are yet to see any images of the HTC U11 EYEs, some believe the phone will look quite similar to the recently launched HTC U11+, but we’ll just have to wait and see if this will be the case or not.

Fortunately we might not have to wait that long, as according to recent rumors, the HTC U11 EYEs will make a debut this month. 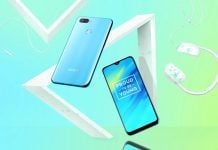