V-MODA knows how to make a killer headset. What I love is that the company prides itself on all aspects of the product, from the durable construction to the heart-pumping audio. Additionally, they are never of a boring plastic design that looks like every other headphone. From the first look, one can tell that it’s special.

The Crossfade M-100 over-ears (launched in 2012) have been a big success for the audio manufacturer. It was the flagship that the company needed in order to achieve a reputable name and fan base in a crowded headphone market. Where does that take us a few years later? Let me introduce the Crossfade Wireless. Built off of the M-100’s design, V-MODA brings it’s acclaimed over-ears to the wireless era. Many audio manufacturers are beginning to embrace this trend, as it’s a popular demand from the market. But moving to a Bluetooth-driven reproduction does bring dangers to audio quality. Was V-MODA able to retain its renowned sound? Let’s find out.

Every V-MODA product starts with the box. The company prides itself with focusing on the details, and the unboxing presentation is no exception. The Crossfade Wireless box has relevant fashion cues from a leathery handle and latch. 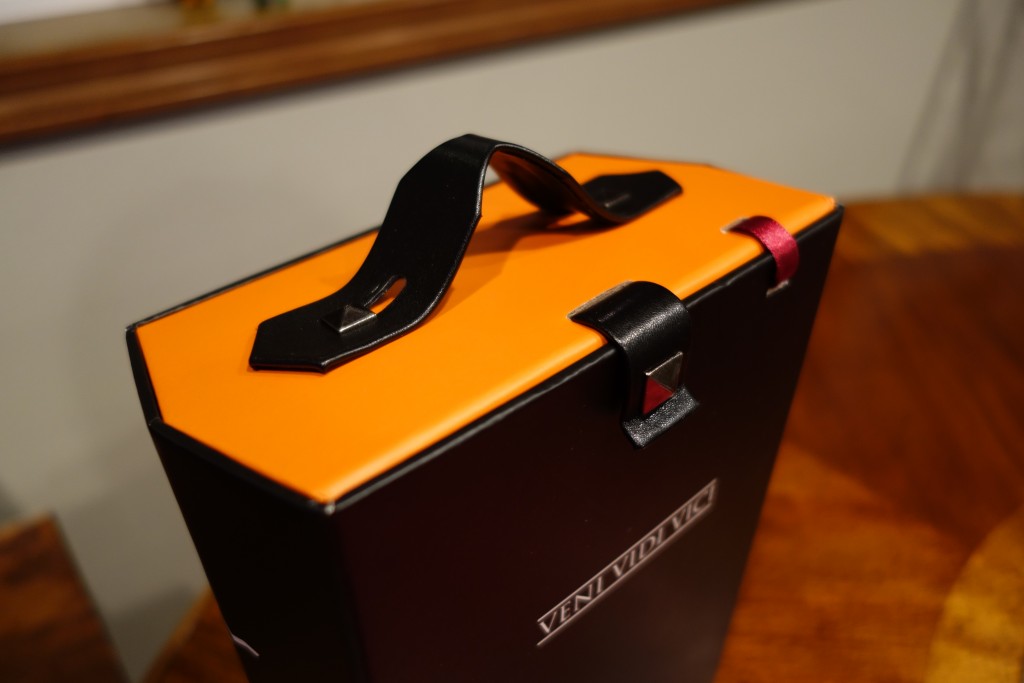 Every V-MODA box has a red ribbon that you have to cut first (a ribbon-cutting ceremony, if you will). Within the box, you’ll cleanly find the headphone case and manuals. 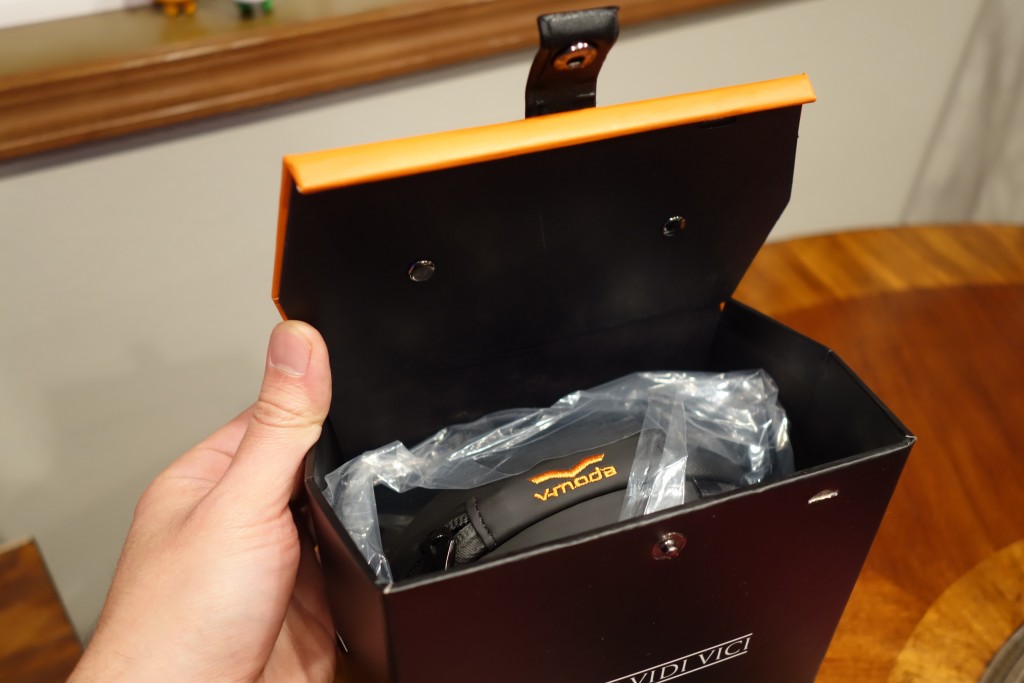 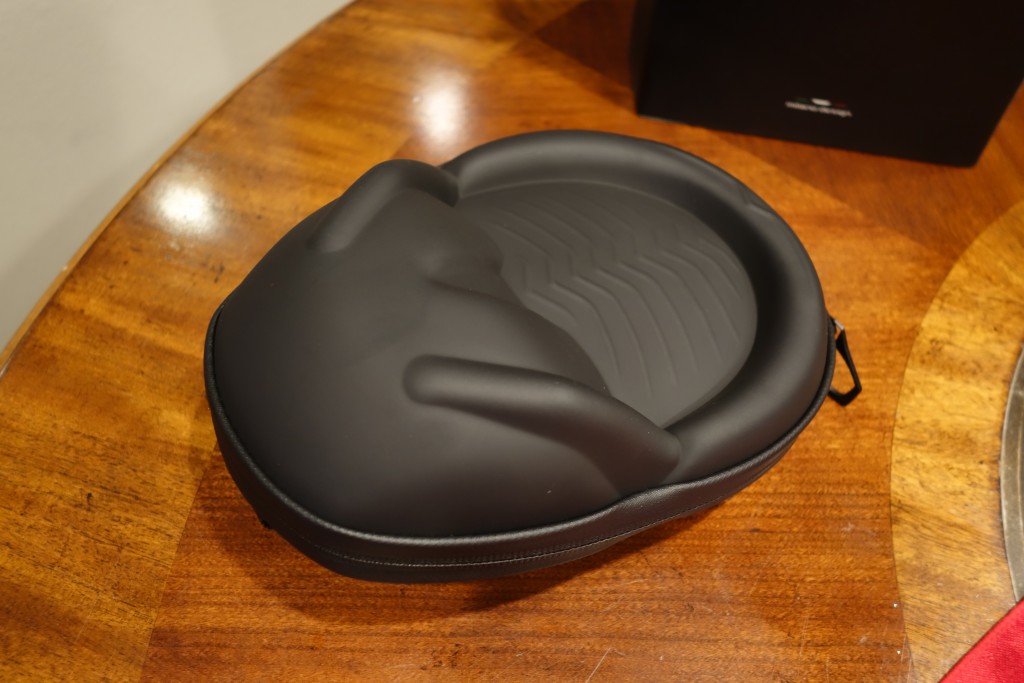 The case is very sturdy; I feel like I can throw it around and everything would be completely safe. It is secured by a zipper all around and has a very nice feeling soft, smooth finish. Unzip the case and we get an eyeful of our new prize. 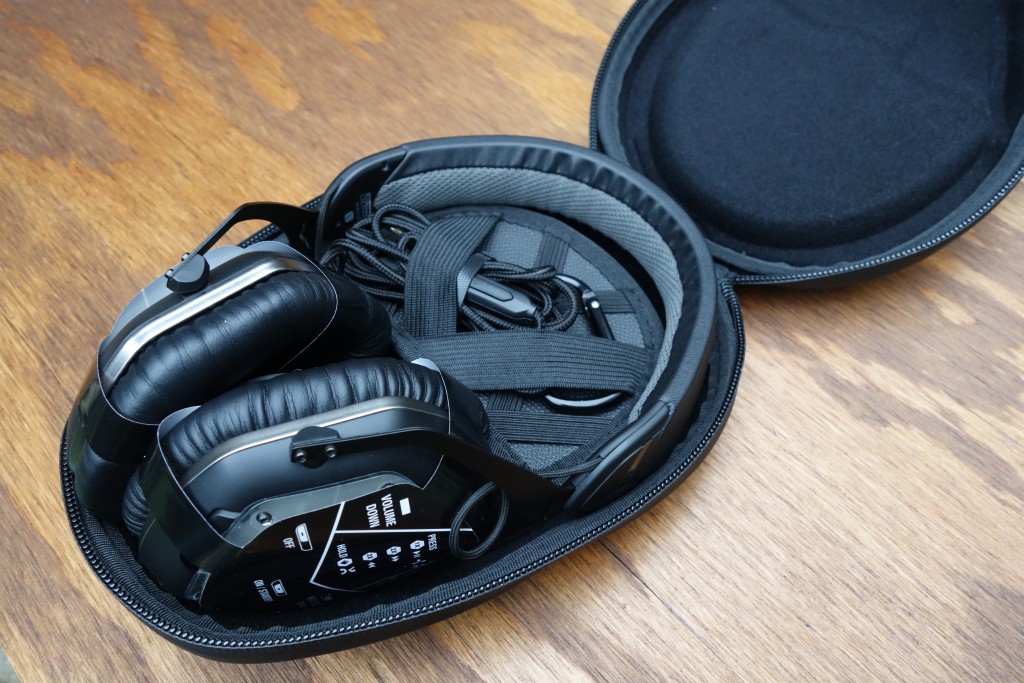 When laying everything out, we find the headphones, USB charging cable, audio cable (yes, these can do either wired or wireless), and a carabiner clip (to attach the case to a backpack or the like). To save you from a wire mess, there’s a Velcro pad that can hold the wound-up cables and sit neatly in the case. 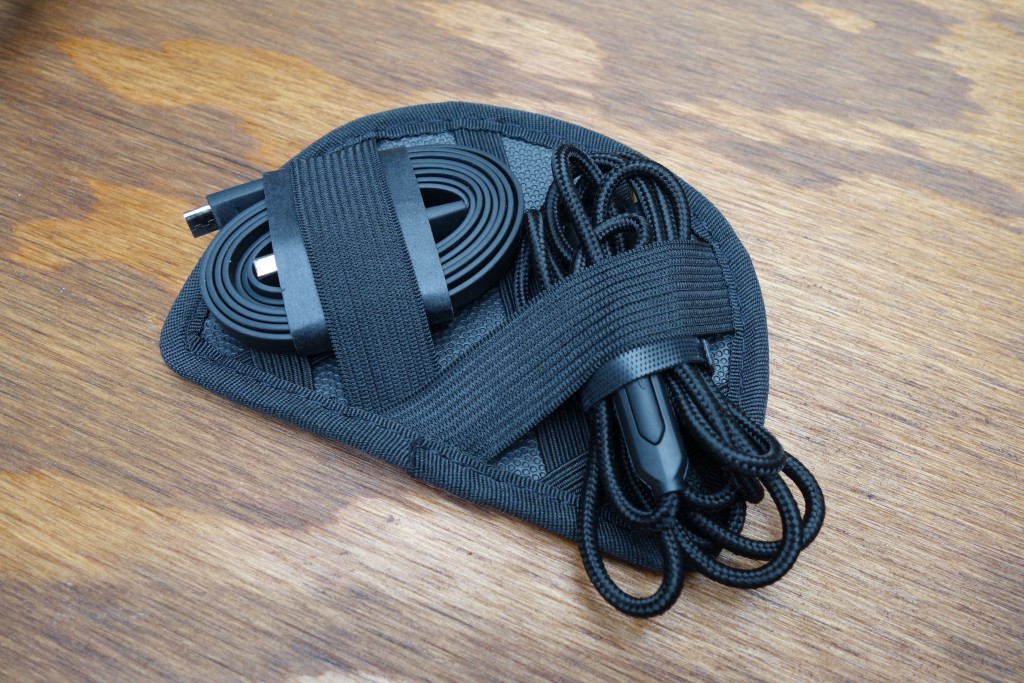 If you’ve used a V-MODA headset before, you’ll be in very familiar territory with the Crossfade Wireless. Actually, you’ll be hard-pressed to tell any difference. And that’s not necessarily a bad thing. The original design is still attractive, and dare I say timeless? It works, from both an appeal and durability standpoint. So I’m not bugged one bit by the recycling. 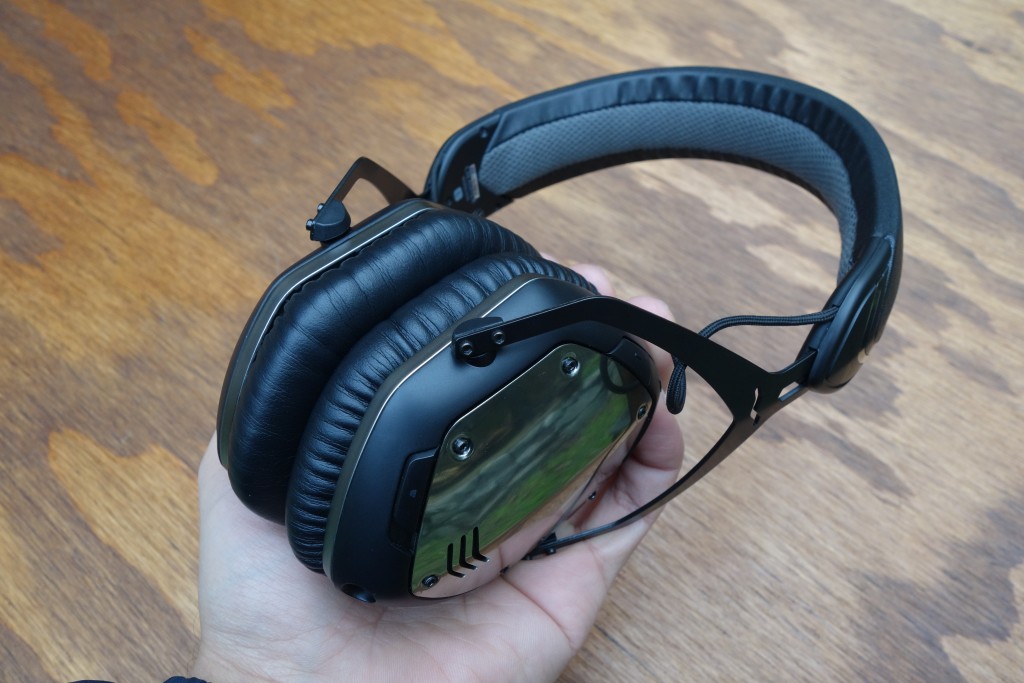 I am bugged though that the earcups no longer fold down to collapse the headphones to a compact size. The nifty hinge mechanism from the original design is gone. I’m not sure why V-MODA did this, as the hinge point is separate from the electronics. One guess is that the earcups are larger than they were on the M-100 (due to the extra components to enable wireless playback), and therefore they wouldn’t be able to fold down nicely. 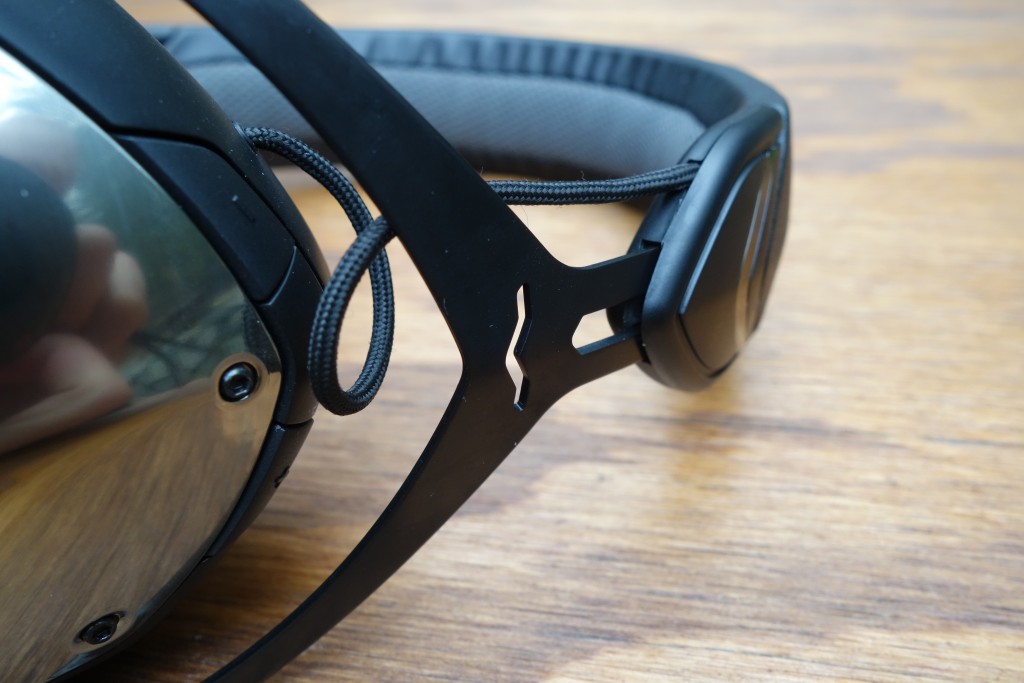 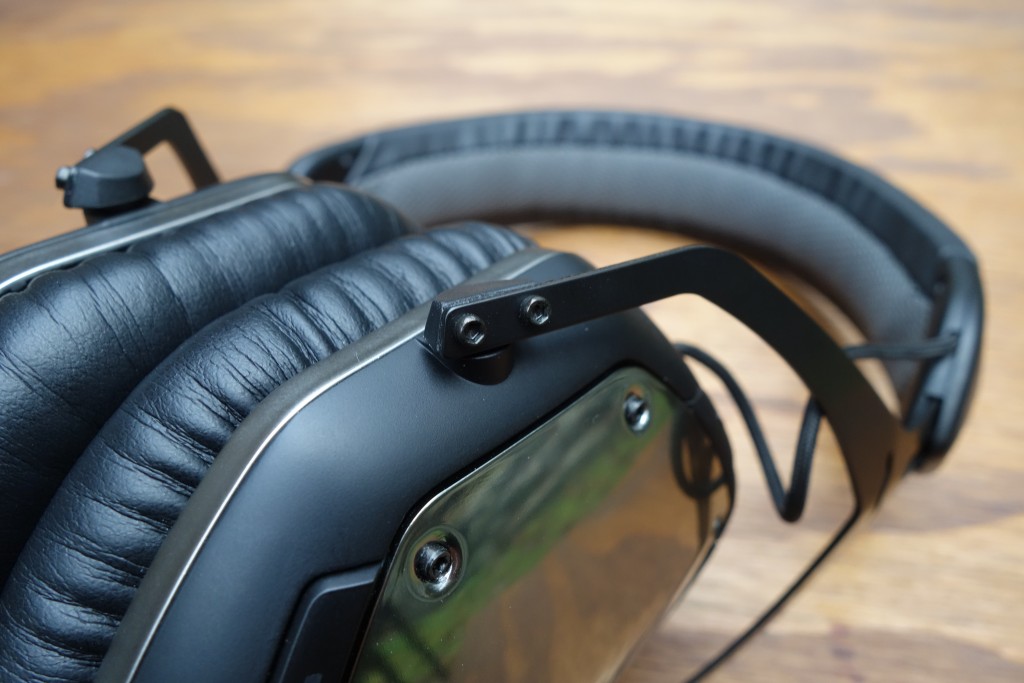 We still have the cool metal stems that bridge the earcups and the headband. They extend out of the band, clicking at different points of extension to suit larger noggins. The headband still has a soft, leathery feel, and a subtle cushion for the head rest. 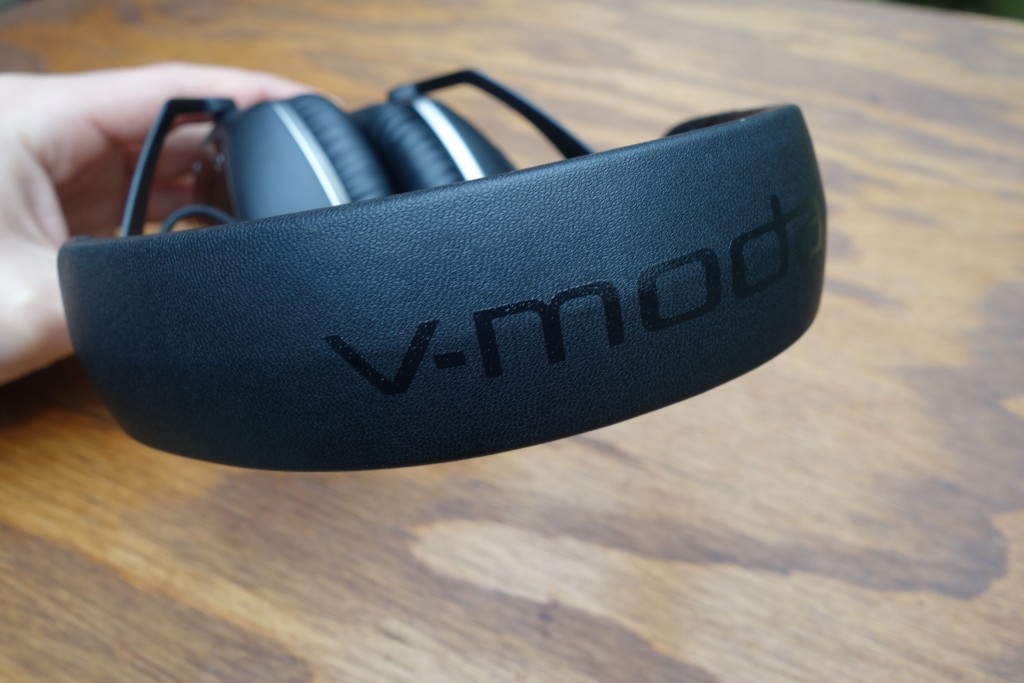 I must mention that the Crossfade Wireless allows for a strong level of customization. The silver shield that you see on this pair is the base plate. Over the years, V-MODA has built up its library of unique looks that you can affix. As of late, there are a variety of materials to choose from (that range in price accordingly) and 3D-printed plates. You can even make your own design and send it to V-MODA to make and install (or you can order it after the fact if you decide to do it down the road). No one else offers this level of self-expression on a headphone, and I think that should be applauded. Not only that, but there are four base themes to choose from, with different color accents. The review unit I was given is called Gunmetal, which has a stealthy, grey color scheme. The other three are Rouge (black with red accents), Phantom Chrome (black with chrome accents), and White Silver (white with silver accents).

I think I’ve made the point that the implementation of style in the Crossfade Wireless is unprecedented.

I digress; let’s finish up our tour. Aside of the metal plates, the earcups are constructed out of a smooth finish plastic. I think it feels great in hand and not cheap at all. V-MODA claims that it builds every product like a tank, and I have no reserves about that here. Where the earcups contact your head are pillowy leather cushions. They’re soft and supple to the touch, and the openings are generously large and should work well for most ears. If you’re wondering how well those ear cushions work in practice, I’ll say I’ve really enjoyed them. V-MODA has nailed the right amount of firmness. They have enough clamp to stay on your head (even while exercising), but not enough for discomfort over some time. The material and cushion is very comfortable. But bear in mind that leather can heat up after a while on your head, and these aren’t absent of that occurrence.

Although this Crossfade is wireless-capable, they aren’t limited to it. You can attach a headphone cord and essentially turn them back into the M-100. This was very thoughtful of V-MODA to do, because if you run out of battery they won’t then be a paperweight until they can be charged back up. The system is also smart enough to turn off the wireless electronics when the cord is plugged in (making sure there’s no interference or wasted battery). The cable generously includes a microphone and button to pickup/end phone calls. In the above image, you’ll also see a slider button on the earcup. It’s a two-stage slider. The middle position turns the Bluetooth on and the next position makes the Bluetooth connection discoverable. The wireless playback controls are on the top of the earcup, for volume up/down and play/pause. The buttons take a little getting used to. They’re stiff and require a firm press. Also, it’s hard to tell which button your finger lands on (there’s not much of a distinctive feel between them), so you’ll fumble at first until it you get used the placement.

On the other earcup, you’ll only find a micro-USB port for charging the internal battery. V-MODA rates the battery at up to 12 hours of playback (depending on the volume/music). 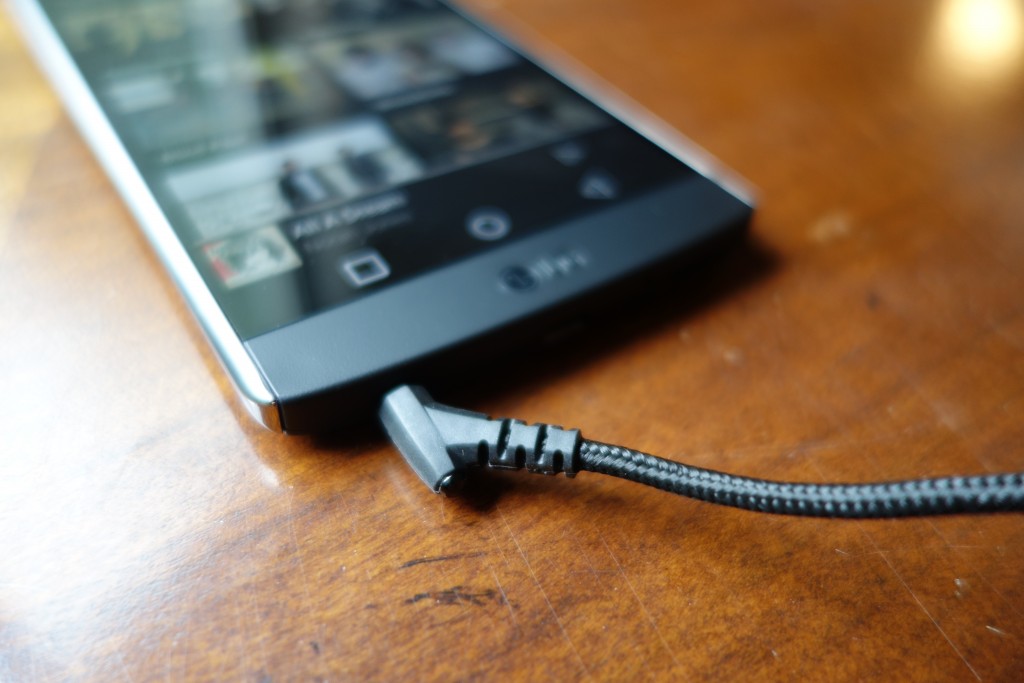 V-MODA is known to seriously deliver in regard to audio quality. So it took on a tall order to maintain the M-100’s excellent sound in a wireless situation. The concern is that Bluetooth technology requires that the stream is compressed. Additionally, a specialty DAC (digital-to-analog converter) needs to be fitted into the earcups to receive the signal. This means that the DAC needs to be well done, or the wired setup may sound significantly better.

So with these things in mind, lets see if the Crossfade Wireless live up to the promise. We will first begin with the baseline sound from the wired setup, of which I use the LG V10 (HiFi SABRE 9018 DAC setting) and Tidal HiFi music samples.

If you like the M-100 sound signature, you’ll be right at home here. What I love about V-MODA’s headphones is that they are extremely engaging, even on the new Zn in-ears that I reviewed recently. The audio hits hard and keeps my heart pumping and my foot tapping the whole time.

To my ears, the Crossfade Wireless slightly refines the M-100’s sound. The M-100 was a tad too V-shaped for my tastes (recessing midrange frequencies for a prominence of bass and treble), and we now have a more balanced out spectrum. Still, the bass is hard-hitting as ever. V-MODA’s headphones mostly satisfy bassheads, and the Crossfade Wireless is no exception.

I really appreciated the mids. Moving them forward creates a fuller sound, and I can further enjoy the natural-sounding vocals that V-MODA excels at. The treble is also delivered fantastically and is very detailed. You can hear depth from high-pitched sounds and damping of cymbal-like instruments. These overall reproduction creates a nice 3D soundscape that encompasses your attention. I loved the immersion from sensing the different placements of elements in the sound.

However, I can get down to the nitty-gritty and point out imperfections. I wouldn’t necessarily call the Crossfade an audiophile’s headphone (the bass emphasis alone keeps it from that). I do have pricer headphones that have cleaner and clearer reproduction (when one focuses on the distinction and definition in the different sounds). But I think V-MODA’s #1 priority is to make a fun headphone, and it certainly succeeds in that.

I’ll cut to the chase. Unfortunately, the audio quality in the Crossfade’s wireless form isn’t completely maintained. Some elements in the reproduction do take a back seat. But the impact is generally minimal. The gap really depends on your source. If the wired setup is fed Hi-Fi music files that are run through a competent DAC, then the wireless method won’t be able to compete. But if you’re comparing it to streamed music out of the headphone jack of a typical phone, then it won’t be that far off.

Specifically, when I compare the wireless playback with wired from a good source, we lose impact from the sub-bass (the low frequency, deep bass region) and mids. The treble also loses some definition (I particularly noticed less sparkle), but it’s minimal. The mid-bass surprisingly maintains its strength; I feel like V-MODA tried its best to retain it for that relevant punch.

Bear in mind that these impacts to the audio quality are minimal for the most part. The headphones still sound awesome (I felt like V-MODA did the best it could with the Bluetooth limitation) and you really have to be nit-picky to be bothered. And as I mentioned before, when I compared wireless to wired from a typical phone DAC and music streamed from Play Music, I didn’t notice as drastic of a difference. All in all, the Crossfade Wireless are an excellent pair of versatile and fun/engaging headphones. The retail price runs at $300, and in my opinion, they are totally worth it. The fact that you can still plug them in as a wired set really does it for me. Audio through Bluetooth still has its limitations, so it’s fantastic that you can still crank out quality tunes to the fullest when you don’t mind the wire. They still sound great in the wireless form, and it’s great to have the ability for when you just care about the convenience.