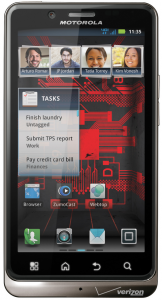 And here we thought that September 8th was going to simply pass us by.  Verizon has finally done it, announcing the Droid Bionic for release on September 8th, some nine months after its initial debut.  To be fair here, we’re not talking about the same handset that was shown off in Las Vegas.  But still!

Starting tomorrow, Verizon customers can pick up the latest model in the Droid lineup, the one that rules all machines.  Carrying a $299 price tag, it’s more expensive than we’d like it to be however we don’t make the rules here.  Details include a dual-core 1GHz processor, 1GB RAM, a 4.3-inch qHD display, 8-megapixel camera (1080p HD video) and support for 4G LTE.  Toss in a front-facing camera, HDMI output with mirror mode, webtop docking capability, and 32 GB memory (16GB on board and 16 GB microSD) and we can see why Verizon wants to charge so much.

Verizon has also announced a number of official accessories for the Droid Bionic, including the laptop dock, vehicle  navigation dock, and battery dock.  Hit the break to read the press release and learn all there is to know about the handset and its accessories.

Unsurpassed Power, Speed and Entertainment On the Fastest, Most Advanced 4G LTE Network in America

DROID BIONIC is the first Verizon Wireless smartphone to combine 4G LTE with the power of dual-core 1 GHz processors, 1 GB of RAM and a stunning 4.3-inch qHD display – all in a sleek form factor that makes it the thinnest 4G LTE smartphone from Verizon Wireless. Customers can expect to fly across the Web on the Verizon Wireless 4G LTE network with download speeds of 5 to 12 Mbps and upload speeds of 2 to 5 Mbps in 4G LTE mobile broadband coverage areas.

DROID BIONIC introduces a host of groundbreaking applications and accessories that turn the device into a multimedia hub, a ruler of remote access and a purveyor of virtuality. DROID BIONIC introduces ZumoCast™ by Motorola, an application that lets customers bring their digital world of videos, music, pictures and documents stored on their computers to their handset via remote access. With its revolutionary Webtop application, DROID BIONIC can beam a full-featured Firefox® Web browser 4.0, email or documents to a TV or monitor, like the separately purchased Lapdock™ with a 11.6” screen, keyboard and integrated trackpad.

Accessories such as the HD Station let DROID BIONIC users turn the phone into an entertainment center or home office. Customers can view pictures, video, and content from the DROID BIONIC on any HDTV or monitor by connecting a separately sold HDMI cable. They can also take a conference call while editing documents and surfing the Web. And, of course, the DROID BIONIC lets customers share their 4G LTE signal with up to five Wi-Fi-enabled devices when they activate the Verizon Wireless Mobile Hotspot. The device of the future today, the DROID BIONIC also includes the following features: