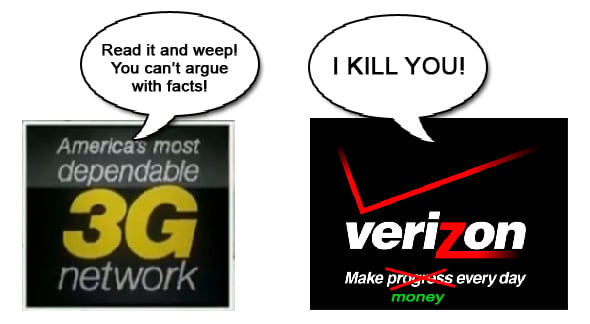 Verizon has really overstepped their boundaries this time. Embarrassing AT&T is one thing; they deserve it. But asking Sprint to remove its “Most Dependable 3G Network” claim is narcissistic, pompous, and flat out wrong.

I’d like to quote my personal site, just to prove a point…

Here are some quotes for ya…

Gizmodo – “Sprint is a serious contender in almost any locationâ€”and should be taken seriously as a 3G and 4G data service provider”
PC World – “Sprint’s results lent credence to its ‘most dependable’ claimâ€¦The Sprint network performed especially well, both in speed and in reliability, in our test cities”
DataOutages.com – Sprint – Fewest data service outages of any major wireless provider
DSLReports.com – Sprint Ranked #1 in Reliability among major wireless data providers
Novarum – “Sprint offered the highest performance with the greatest availabilityâ€¦ For both ATT and Verizon, in about 25% of the locations with service – we could not get 3G service but rather fell back to 2G service”
MobileBroadband-Reviews.com – Sprint Wireless Data Ranked #1 For Coverage and Reliability. “The following is not an overstatement. Sprint mobile broadband is one of the best 3G services you’ll find out on the market right now. If you’re a Wireless Broadband Exposed reader, you already know that they have the largest and best mobile broadband coverage. In addition to that, their average mobile broadband speed is better than Verizon and AT&T in a number of cities.”

If you’re interested, you can read my full post here… Verizon’s Ego Trip… Will It Ever End?

Real-life use shows that Sprint’s 3G network is actually more reliable than Verizon’s. For Verizon to say otherwise, solely based on Nielsen Co.’s studies, is pure horse sh***! Never have I seen such arrogance and stupidity.

I understand going after AT&T, being that they’re the number two carrier in the U.S. and they hold the key to smartphone dominance (the iPhone). After all, AT&T are a bunch of lazy idiots who continuously fail to bring their network up to par. Sprint, on the other hand, continues to innovate and expand the limits of their coverage, phones, and plans. How can Verizon pick a fight with that? Don’t forget, Sprint‘s also going through rough times with its subscriber base and hasn’t posed a major threat to Verizon in years. Has Verizon no shame?


So… What does Verizon’s attack mean for Sprint, and what does this have to do with Android?

Verizon bringing up this whole feud may actually end up hurting them. Once tests are run and Sprint is proven to be the more reliable network, publicity will commence its wonders. I bet you’ll begin to see more and more customers switching over to Sprint. It’s never good to mess with your only CDMA competition if you ain’t gonna win. Verizon sure picked the wrong fight here.


Android’s role in all this is obvious. People joining the Android nation will have to decide between the largest 3G network, and the most reliable one. True, this has always been part of the equation, but up until now, most users weren’t really aware of it. Because of all this drama, it will be fresh on everyone’s mind. For many, the choice of who to entrust with their precious Android device may not be so easy.

In my eyes, it’s a no brainer. I’d rather have a cheaper plan with more features, the most reliable service, and the ability to roam (onto Verizon, go figure) in the rare need. If you go with Sprint, how can you lose? I think more people will begin to see this now.

Verizon has opened Pandora’s Box. I really hope they thought this through. Good luck. I hope you lose.