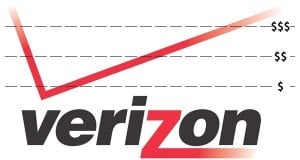 Well, we knew this day was coming sooner or later. Verizon has confirmed the date for what many people feared: their switch from unlimited data plans to tiered data plans. Starting on July 7th (that’s this Thursday, folks), Verizon will offer three options for smartphone users. VZW customers can pay $30 per month for 2GB of data,  $50 for 5GB, and $80 for 10GB, which is pretty much the rumored pricing we heard about last month. For every gigabyte that users go over, they’ll be charged an additional $10. Big Red is also offering a “$10 for 75MB per month” plan for feature phones.

Now, the majority of VZW customers aren’t happy about this switch, but we have to wonder, how many people actually use 10GB of data every month? According to Nielsen, the average user pulls down around 600MB per month, but high end users grab around 4.6GB monthly.  Of course, there are several heavy users that will probably go well over the 10GB mark. But when we look at the average consumer, how many people will use more than 5GB?

With that being said, there’s only a few questions for us to ask you guys (and gals): what do you think about the switch to tiered data plans? How many of you think you’ll go over 10GB? Sound off in the comments below, or on our Facebook Wall!