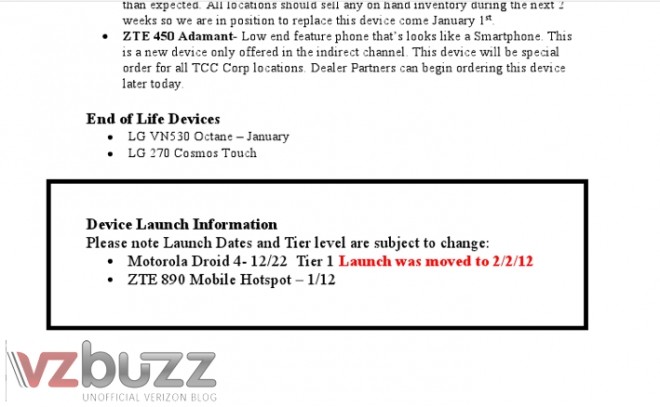 In recent months, Verizon Wireless has launched a lot of good Android devices. Their lineup is one of the best, and the launch of Galaxy Nexus few days ago made it the best by far. Previously, rumor had it that Verizon would be launching the Droid 4 few days after the launch of the Galaxy Nexus, but now VZ-Buzz is reporting that Verizon will launch it next year on February 2nd.

While there’s no idea why Verizon is delaying the launch for 2 months, it seems the reason could be the LTE outages, but what I believe is that Verizon wants to wait because they just launched the Galaxy Nexus –  meaning, if they launch the Droid 4 as well, then the Droid 4 will probably fail to stand in front of the Nexus because it’s the first ICS device. It was also very anticipated.

Hopefully, in February, Verizon will launch the device with Ice Cream Sandwich on board, which will attract more users. This is something they really need to do because – right now -everyone’s got ICS in their mind. In the meantime, what do you think is the reason of this delay? Share your thoughts with us in the comment box below.