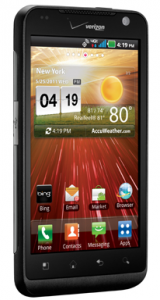 Verizon, in an 11th hour press release, has finally confirmed that the LG Revolution will join their smart phone lineup tomorrow, May 26th. The LG handset had been rumored for a May 26 launch date for the last few weeks, however it seemed like Verizon was just about that date slip by. This will be but one of three new Android phones landing tomorrow, joining the Xperia PLAY and Motorola Droid X2. The LG Revolution will run customers $249.99 with a new two-year customer agreement, a common price point for Verizon’s 4G LTE devices.