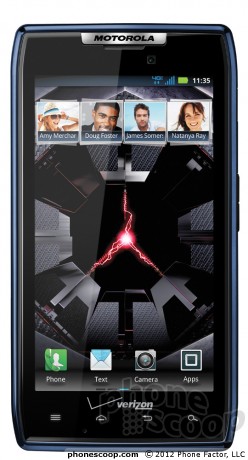 Droid RAZR was launched by Verizon Wireless last year, and we all know that it’s one of the most sexiest devices ever launched by Motorola. It seems that Verizon is still selling the Droid RAZR like hot cakes and now they are bringing in a new colour to change the trend a little bit. Today, Verizon officially confirmed the blue Droid RAZR which is available in select stores right now, and it will be available nationwide on May 17th.

Motorola RAZR series was launched back in 2005 and they were ‘superphones’ of their time. However, they are now replaced by the Droid RAZR, the smartphone of today. Back then, Motorola launched the RAZR in variety of colours, and the Droid RAZR is also available in different colours and a model as well i.e. RAZR MAXX.

The device will be available for $99 with a two-year contract. Everything is same under the hood like a 1.2Ghz dual-core TI OMAP processor, 1GB of RAM, 4.3-inch AMOLED QHD display, 16GB of storage space and an 8MP camera. The only sad thing is that it’s still running on Gingerbread.

So anyone planning to grab the blue Droid RAZR, tell us in the comment box below.