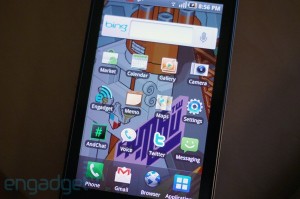 With the launch of today’s Verizon Fascinate, each of the four major carriers in the United States now has a Samsung Galaxy S series phone available.  Rather than churning out the same phone over and over, each wireless provider has opted to customize their handsets with various tweaks and options.  For instance, Sprint‘s Epic 4G comes with a physical QWERTY while T-Mobile‘s Vibrant comes preloaded with James Cameron’s AVATAR and The Sims 3.  So, what helps Verizon’s new phone stand out?  How about the removal of Google Search?

To be fair, we’ve not received our review model yet.  We do know that the phone is powerful, sleek, and full of awesome.  And, aside from the exclusion of Google Search, there are plenty of standout features that make the Fascinate a great buy.  However, I still want to talk about the search options that come with the device.  If you haven’t heard yet, Verizon is using Bing for the search tool on this handset.

When you load up the phone you will find that Bing is the default search on the home screen widget, within the browser, and anywhere else you would look.  Further, there is no option to download and install an alternate.  No Yahoo! or Google for you.  Changing the search engine is nothing new, carriers around the world have done it.  My beef comes with the restriction that prohibits choice.  It’s not that I hate Bing at all.  I simply don’t use it and prefer Google instead.  Further, recent studies have shown that more people prefer even Yahoo! over Bing.

My guess is that this comes from some form of licensing or exclusive deal between Microsoft and Verizon.  If I were to throw a dart, I’d say that there will be probably be a few months of releases like this.  I really hope this doesn’t become the norm for Verizon or any other carriers.  Paying for Striking a deal to grow your market share is shady stuff and this only angers people.

I’d like to hear your thoughts on the matter.  What do you think of Verizon and Microsoft climbing into bed over the Fascinate?  Is this a deal breaker for you?