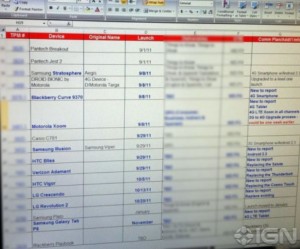 Verizon‘s smart phone plans for the next six months have just been spilled online and it’s got a whole bunch of Android.  IGN has obtained a copy of the carrier’s roadmap as it pertains to the time frame of September through January of next year and was more than happy to share it.  Looking through the image above, there’s a handful of new stuff hitting our radars for the first time.  Let’s get right into it!

So there you have it, a mix of confirmations of previously leaks with a bit of new stuff for good measure.  We might be watching grass grow for the next few weeks but once school gets started, things look to be full throttle for the next months.

Are you surprised to see phones like the Thunderbolt and Revolution getting phased out less than a year after they arrived?  How do you feel about accelerated life cycles?  Did you notice that the Dinara was not listed among the details here?  Maybe it’s beyond January?