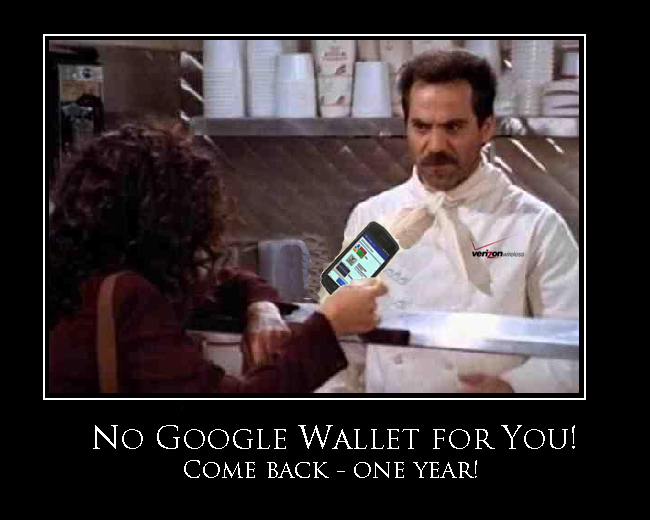 Let’s hope George Costanza isn’t a Verizon customer (or AT&T, or T-Mobile) otherwise he’ll be holding on to his overly obese wallet a bit longer. Surprise, surprise — apparently Verizon will not be allowing its Galaxy Nexus customers access to Google Wallet. In good old anti-competitive spirit, Verizon has decided to block Google Wallet due to it being a direct competitor to their own backed mobile payment system ISIS.

To me this is ridiculous, and I quite can’t understand any of Verizon‘s logic. If they are going to block a Google app meant for a Google device — because it competes with services they have an interest in — then why not block Google Maps (VZ Navigator competitor), or Google Voice (anti-Verizon on every front), or any other app that prevents them from raping its customers? It’s okay for Verizon to force Bing (a direct competitor of Google) onto an Android device, but they have a problem with a system that’s only available on one Verizon Android device because it might steal their thunder?! Seriously, what the hell is going on?!

This isn’t the first time Google Wallet has been blocked — it’s also unavailable on Nexus S devices on AT&T and T-Mobile (also supporters of ISIS). Personally I wouldn’t have a problem with this had these carriers actually manufactured or developed any part of these devices — but they didn’t! They shouldn’t be afforded the power to dismantle, disable, block, or mess with any of the features already built into a handset or application. If they don’t like features of a particular handset, then they shouldn’t carry it. This facade of a “Nexus” device is really starting to irk me and I can’t help but wonder if the “Nexus/Google experience” did in fact die with the Nexus One.

I strongly believe what the carriers are doing is wrong and something I consider anti-competitive and illegal, but unfortunately — it is allowed. The Verizon Galaxy Nexus just continues to become less and less appealing to me — not because it’s less of an amazing device — but because it’s less of what I perceive as a “Nexus” device.

Costanza would not be happy!