It’s been quite the week for Motorola.

The Internet awash with rumor and excitement regarding its next installment of their popular Moto Z Force Series; the Moto Z2 Force – backed up with stunning renders and a full 360 degree CAD available for all to obsess at their viewing discretion.

Back in June 2016, Motorola launched its Moto Z Force upon the mobile world, and by all accounts standing side by side with Moto’s Z device – “The Force Was Strong” (sorry I couldn’t help myself).

In comparison to the Moto Z: With the Force Packing a shatterproof display – bigger battery for improved longevity and it being all the more comfortable in the user’s hand lead to the Moto Force Z to accumulate quite the fan following. We here at AndroidGuys went as far as to say it’s Motorola’s BEST PHONE EVER.

However, there was a notable chink in the armor that had end users backed into a somewhat carrier based corner, but this is looking like it’s about to change.

According to Evan Blass, 2017 will see Verizon’s exclusivity on the Moto Z2 Force being diminished, meaning the possibility that users will have the option of either purchasing the device in an “unlocked” state or at least on a varied range of carriers such as T-Mobile and Sprint, as is currently the case for the Moto Z. 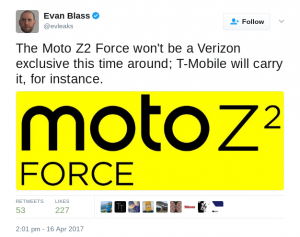 We are anticipating a release date of around June 2017 and with that said, we are all left wondering if the non-exclusivity is the just the thing needed to take this already popular device to the masses.