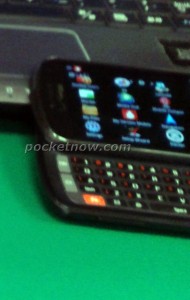 While Verizon and Samsung have already teamed up on a couple of Android smart phones (Fascinate, Continuum), they have yet to offer a sliding QWERTY form factor.  That looks to be changing, thanks a few photos which leaked online over the weekend.

Pocketnow, who obtained the grainy images, surmises that this Samsung SCH-i405 will offer specifications in the realm of last year’s Epic 4G,  offered by rival Sprint. Should this prove true, it would be considered a mid-range device by today’s comparisons.  Notable specs would probably be a 1GHz processor (single core), and 840×480 resolution screen. That’s quite alright with us as it will likely lead to a wallet friendly price point and alternative to the Droid 2 and (soon to be) Droid 3.

No word on the name of this model nor when it will arrive. The Galaxy S II series is expected to arrive sometime this summer, possibly in July. Word on the street is that Verizon’s iteration will be called the Function.