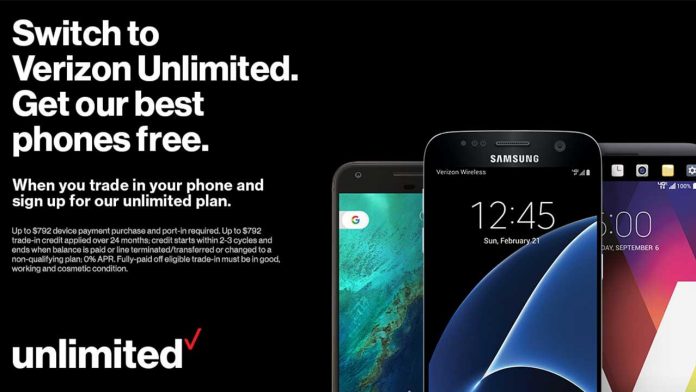 Verizon Wireless on Monday started the week by announcing a limited-time promotional trade-in offer. Launching in conjunction with the new Verizon Unlimited plan, it gives customers a chance to score a free flagship phone from various handset makers.

To qualify, customers must port their phone number in from another carrier and sign up for the introductory Verizon Unlimited plan. Moreover, they need to turn in a working phone that’s fully paid off and sign up for device payment on the new model.

This awesome offer makes it easier than ever to experience unlimited data the way it is meant to be, all on a network that can handle the demands of a digital life.

According to Verizon, the following phones are free to customers who fulfill the obligations: iPhone 7, iPhone 7 Plus, Google Pixel, Moto Z Droid, Moto Z Force Droid, Samsung Galaxy S7, Samsung Galaxy S7 edge, and LG V20. However, in order to get them at no end cost, the subscriber must trade in one of the following devices, first.

Trade in a working model that’s fully paid off from this list and get a new flagship for free:

Should you not have one of those handsets to trade in, you can also get a new flagship from Verizon for as low as $5 per month. How? Trade in something from the list below.

Trade in a working model that’s fully paid off from this list and get a new flagship for $5 per month:

Trade-in credits appear after 2-3 billing cycles and last for 24 months. Leave Verizon early and you’ll be on the hook for the unpaid phone balance(s). Additionally, if you cancel service or transfer your device payment, the credits will stop.