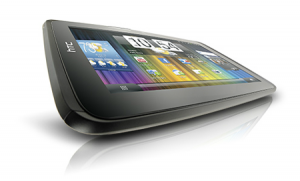 So many toys, so little time! The next review we have up in the EVO line of devices is the newly released HTC EVO View 4G, also known as the HTC Flyer. I got some hands on time to play with the device, and recorded my findings in a video review for you after the break. Check it out and make sure to let us know what you think in the comments!

The Bad
The Bottom Line
I am a little torn when it comes to this device.  Being an owner of a Samsung 10.1 Tab, I thought that I had the ultimate in Android tablet computing, until I started playing with the View.  The one thing the View has which the Tab does not is portability.  The View is simply much easier to take with you on the go, and really shines when using it as a GPS or other communication device as you travel.
I think the market for the View is best placed in the realm of business.  I can see a sales rep or other executive who has to travel frequently using this device as an all purpose digital assistant.  I can even see the stylus, which I am bitterly disappointed in, being useful for light note taking or marking up documents in some way.
The price for the unit is $399 on contract, which is a good price for a unit of this caliber.  It is what the first Galaxy Tab should have come out of the gate at.
If you are looking for a smaller tablet that you can take with you, that will connect to mobile data without tethering and don’t mind having to pony up for a contract device, then the View is for you.  If you don’t fall into one of those categories, look at the Tab 10.1 for your needs.
Check out my video review below to get the full scoop!
[youtube]http://www.youtube.com/watch?v=qmtkPPFgaX8[/youtube]