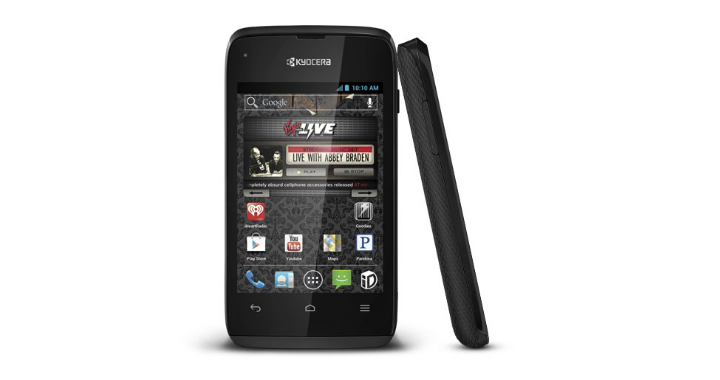 Virgin Mobile today announced the next Android smartphone to join its roster, kicking off the Kyocera Event. Priced at only $79.99, the no-contract handset, runs Android 4.0 Ice Cream Sandwich and features a 3.5-inch display, 3.2-megapixel camera, and 1GHz processor.  Not a ton of power, no, but it beats the heck out of our first Android phone.  What’s more, we love that plans start at $35 a month and do not require any long term commitments.

Look for the Kyocera Event in black at Virgin Mobile or pick up a red one at Radio Shack.

Smartphones can make even the most mundane situation an “event.”  Stuck in line?  Multitask by posting witty observations and pics on Facebook or Twitter.  On an endless road trip? A little online shopping makes time fly by.  The new Kyocera Event Android smartphone helps to make every moment – and dollar – count for anyone looking for an affordable phone, and especially the estimated 500,000 people who each week make the jump from feature phones to smartphones[1].  The black version of Event launches today at Virgin Mobile USA for $79.99[2] without a contract[3].  A red version of the phone will be available exclusively from RadioShack, where Kyocera recently was named the retailer’s 2012 Device Vendor of the Year, beginning March 3.

Kyocera Event’s 3.5” HVGA IPS touchscreen display ensures crisp, bright viewing from any angle while adjustable brightness allows optimum viewing in any light.  With Virgin Mobile USA on Sprint’s nationwide high-speed network[4] and the phone’s 1GHz Qualcomm Snapdragon processor, Event provides snappy access to apps, email and the Web and delivers Virgin’s “Higher Calling” promise to those new to smartphones with its Beyond Talk unlimited data[5] and messaging plans starting at $35 per month.

“Kyocera Event on Virgin Mobile is the perfect device for the millions of people buying their first smartphone, or those who simply want a full featured, yet affordable phone without a contract,” said Eric Anderson, senior vice president and general manager of global sales and marketing at Kyocera Communications.  “Whether it’s the simple elegance of black or the stand-out-in-a-crowd confidence of RadioShack’s  exclusive red, Kyocera Event has style and performance far beyond its affordable price tag.”