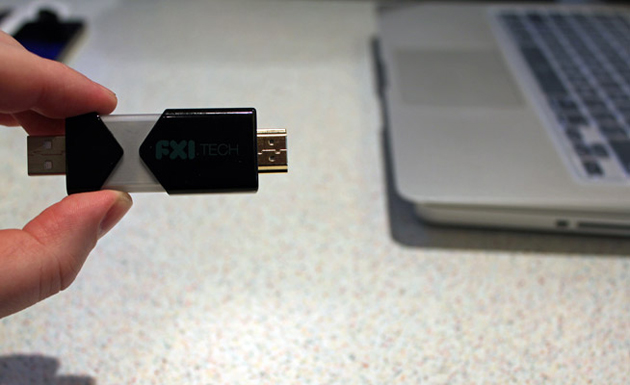 I am an Android fanboy (and proud of it) and like every fanboy, I want every single tech gadget I have to run on Android. While some might call me a dreamer, FXI Technologies actually cares about my happiness and has set out to make my dreams a reality. They recently revealed a product codenamed Cotton Candy (because it weighs as much as a bag of cotton candy), a dreamstick that can run Android OS on any screen. Trust me, I am really stunned by the qualities and features of this awesome gadget, the size is similar to that of USB, but it can do much more. It packs a 1.2-GHz Samsung Exynos ARM CPU, 802.11n WiFi, Bluetooth, HDMI-out, USB and a microSD card slot, and what’s impressive is that it can play 1080p videos as well. It’s compatible with OSX, Windows, and will run on any display such as an LED or LCD TV.

Borgar Ljosland, CEO of the respected company, said that the device will run on tablets, smartphones and set top boxes. Obviously, no one is going to connect this to their Android tablet or smartphone because they are already running on Android, but the point he’s trying to make, is that this device will make it possible to run Android on an iPhone, iPad, Nokia Symbian phones, WP7 phones, etc. Cool isn’t it?

He further mentioned that there’s no limitation to the OS and once it’s out in the market, users will be able to install Ubuntu Linux and ARM version of Windows 8. Only sad thing right now is that we don’t know when this magical device is coming out, but hopefully it will be soon. What about the price? The device is set to cost under $200, which I would say is fair.

I believe this is where computing is headed, having everything handy and portable, making it easy to carry around and work/play with. FXI will offer this device to developers and let manufacturers worry about the business end of things. As it’s a pretty good concept, I’m sure a lot of manufacturers will be showing their interest, and as for our readers, what do you guys think about this amazing gadget?

Source: Android And Me