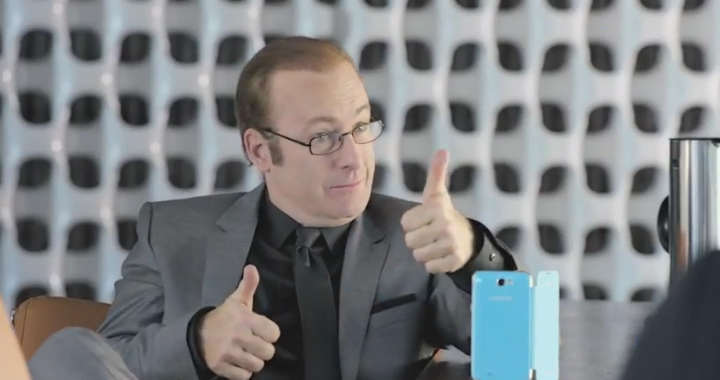 Samsung will have a commercial for the Super Bowl for the second year in a row, reports the hardware maker. To get things going, Samsung Mobile has released a 60-second teaser commercial which will run up to full 2-minute ad. Set to air during the 4th quarter of the game, the campaign is entitled “The Big Pitch  and features Seth Rogen, Paul Rudd, and Bob Odenkirk.

Consumers will have the opportunity to weigh in on their favorite moments and win prizes using the hashtag #TheNextBigThing.

“The Big Pitch,” the full 2-minute ad, and an extended cut version with never-been-seen footage will be released later this week. Consumers will have the opportunity to weigh in on their favorite moments and win prizes using the hashtag #TheNextBigThing.

“The anticipation of Super Bowl ads creates a unique consumer experience,” said Todd Pendleton, Chief Marketing Officer of Samsung Mobile. “The Next Big Thing campaign has allowed us the flexibility to tap into significant cultural moments and relevant conversations while showcasing our innovation.

“The Next Big Thing” campaign has always been about keeping a finger on the pulse of what is current and relevant to consumers,” said John Boiler, CEO of 72 and Sunny. “This ad represents our collaborative, real-time approach to creating ads with Samsung. Their unique approach to marketing has given them a competitive edge and has helped propel the brand to be one of the top 10 in the world.”

Samsung, Galaxy Note, Galaxy S III and Galaxy Note II are trademarks of Samsung Electronics Co., Ltd. Other company names and marks mentioned herein are property of their respective owners and may be trademarks or registered trademarks.

Samsung Electronics Co., Ltd. is a global leader in consumer electronics and the core components that go    into them. Through relentless innovation and discovery, we are transforming the worlds of televisions, smartphones, personal computers, printers, cameras, home appliances, medical devices, semiconductors and LED solutions. We employ 227,000 people across 75 countries with annual sales exceeding US$143 billion. Our goal is opening new possibilities for people everywhere. To discover more, please visit www.samsung.com.