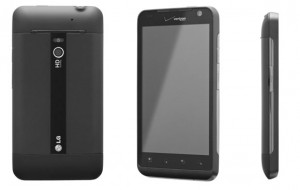 Thanks to Stephanie “The LG Girl” and of course LG Mobile, we have an LG Revolution to give away this Thursday on AGTN! The LG Revolution runs a 1GHz Snapdragon processor on Verizon’s 4G LTE network. It comes equipped with Android 2.2, a rear-facing 5.0 MP camera with auto focus and LED flash, and a 1.3 MP front-facing camera for video chat. It also has 720p HD video recording and playback capabilities.

Are you a Verizon Wireless customer that would love to have the Revolution as your next device? All you have to do is take a look at this picture of Stephanie with the phone, have a giggle, and then leave a comment below with the funniest caption you can think of. The only catch we have is that you need to be following The LG Girl on Twitter and Facebook,  as well as AGTN on Twitter. So go press those “follow” and “like” buttons! 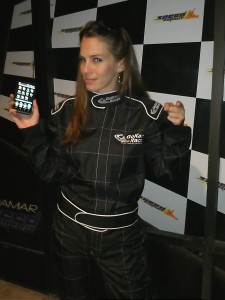 Stephanie is in the process of shooting a video campaign where she’s an underground go kart racer (hence the picture). It happens to be that in real life, she’s actually in a go kart racing league too.

The contest will go until 8PM CST on Thursday July 21st.  We will pick the funniest caption from the comments below, and announce it live on the air. Stephanie will be joining us this week to announce the winner and to talk about the phone. Be sure to tune into Streamly.tv at 9PM CST for the live video and chat.

As always, it’s going to be a great show! Aaron Kasten, Benji Hertel, Stacie Nuss, and The LG Girl will all be there. We might even have more free stuff to give away too. You definitely don’t want to miss it!

Hangout With “The LG Girl” on Tonight’s AGTN and You Might Win an LG Revolution!