WeFi, which bills itself as “the world’s largest free Wi-Fi network,” gathered data during Q1 2010 from users of their app from over 220 countries and territories. It includes data from laptop, netbook, Symbian and Android devices (all the platforms on which the WeFi app is available). By crunching all these numbers, they were able to compile an interesting report. Bearing in mind that reports like this should not be taken as a complete picture, WeFi found that Android use outside the U.S. has taken off in the past year, among other nuggets of information.

“As internet use becomes increasingly mobile, with smartphones, netbooks, and new devices being used in libraries, coffee shops, universities and hotels, there is an increased interest among mobile operators, wireless internet providers, as well as average users in studying just how and where users are connecting. Leveraging our number of users and our large database of Wi-Fi access points in over 220 countries, WeFi has been analyzing the available data and we are excited to share this information with the public.”

The report includes a distribution of Android devices by country that shows 40% of WeFi’s Android users are from the U.S., leaving 60% shared between European and Asian countries. WeFi notes that as of mid-2009, U.S. devices represented 90% of the sample, indicating significant growth outside the U.S. since then. The chart also highlights the fact that Android devices are now used across nearly all of the “industrialized” world.

WeFi also found that average Android users don’t consume more than 500 Mb each month through wifi, much lighter than what average laptop users go through. This seems to make sense, since most Android users use wifi to supplement another data connection.

Another interesting analysis is of wifi usage by Android model. Which one was the most popular? The European HTC Hero. The fact that it has been available from many European providers helped it to take this spot. The close second was the G1, unsurprising given that many people still use the trustworthy original Google phone. Number three in the list, also not a surprise, was the Droid. A big marketing campaign (thank you, Verizon) was the key for its quick success. You’ll also see in the list below that despite the Nexus One’s lackluster sales, it managed to grab nearly 5% of wifi usage, nearly as much market share as the Sprint Hero. 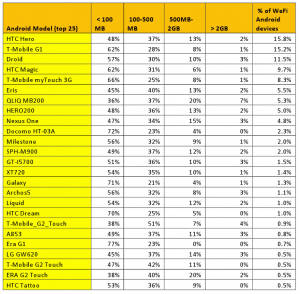