One of our biggest pet peeves about today’s phones is that they die too quickly. While battery capacity has risen over the past few years, so has power sucking hardware like faster processors and higher resolution screens.

Companies like Qualcomm have made advances in charging technology to allow phones to quickly charge and charge wirelessly, but the issue remains. There’s an entire third party accessory category for external battery banks and cases that act as batteries due to the poor battery life of our beloved phones.

But now Huawei’s breakthrough aims to change all of that. 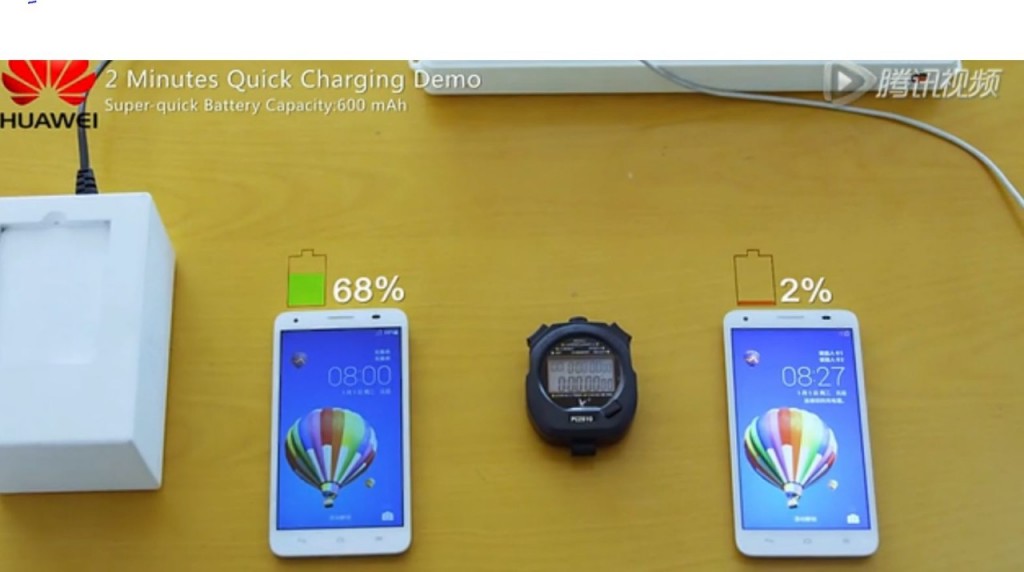 In a separate demonstration, Huawei displayed a 600mAh battery that charged up to 68% in just two minutes. This revolutionary technology smokes the next closest competitor, Qualcomm Quick Charge 3.0.

What does this mean for the future of the industry? Well, consumers shouldn’t expect to see this technology make it into next year’s phones. It’s still a very new technology. The new technique relies on hectometers that are bonded to a molecule of graphite in anode. Not your average Li-Ion battery.

While this new process wouldn’t make longer lasting batteries, it would mean that you could grab a charger out of your bag and have another full battery in the time it takes to read this article. Not only is this exciting for smartphones, but also for smartwatches. Most smartwatches have batteries smaller than the 600mAh battery demoed, and last about a day, but could benefit from these faster charging batteries, just like phones could.

Huawei is currently looking to work with partners to bring it to the market as soon as possible, but no timetable has been given. We can hope that we’ll see this technology in the 2017 or 2018 round of flagship phones, but significant questions remain. First and foremost, how does this affect the long term health of the battery? There have been reports released that current quick charging techniques hurt battery health due to the heat they produce. Hurdles like this need to be figured out before this new super charging will be seen in consumer products.

Once it’s ready for consumer grade products, the question is whether we see this in phones other than Huawei’s, or if they keep it as a proprietary feature to promote their own phones. Huawei just recently entered the flagship market in the United States by teaming up with Google for the Nexus 6P, and this would be a compelling feature to sell their phones on in the future.