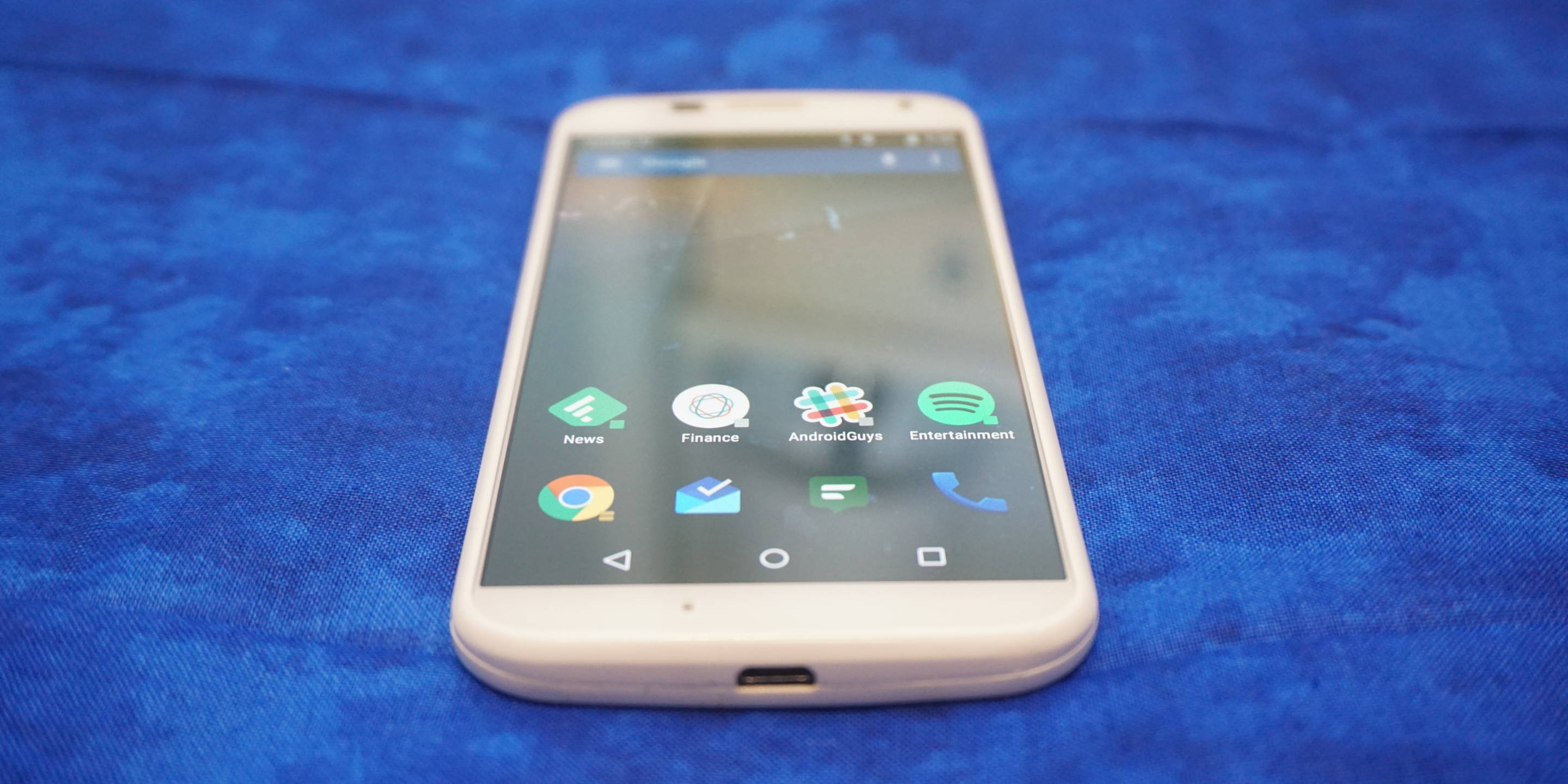 Most of the writers here at AndroidGuys change phones pretty regularly with the majority switching at least once a year. With my trusted Nexus 6, I probably have the oldest daily driver on the site as my device nears its second birthday. However, many smartphone users are not able to upgrade their phones as often as tech reviewers for reasons ranging from lack of funds to lack of interest.

After my friend broke his phone and rendered it basically useless, I found my original Moto X and lent it to him until he could get a new phone. Now, he has a new one, and the Moto X is back in my possession. This entire scenario made me wonder what it would be like to use a three-year-old phone as a daily driver. So I switched back to the Moto X for a week, and I am ready to share my experience.

The original Moto X was small when it came out 3 years ago, and today, it seems even smaller. Although the 4.7″ screen is identical in size to the current iPhone 6s’, the size of the phone is only slightly larger than an iPhone 4s. I am still impressed every time I look at just how much screen Motorola packed into a chassis this small. 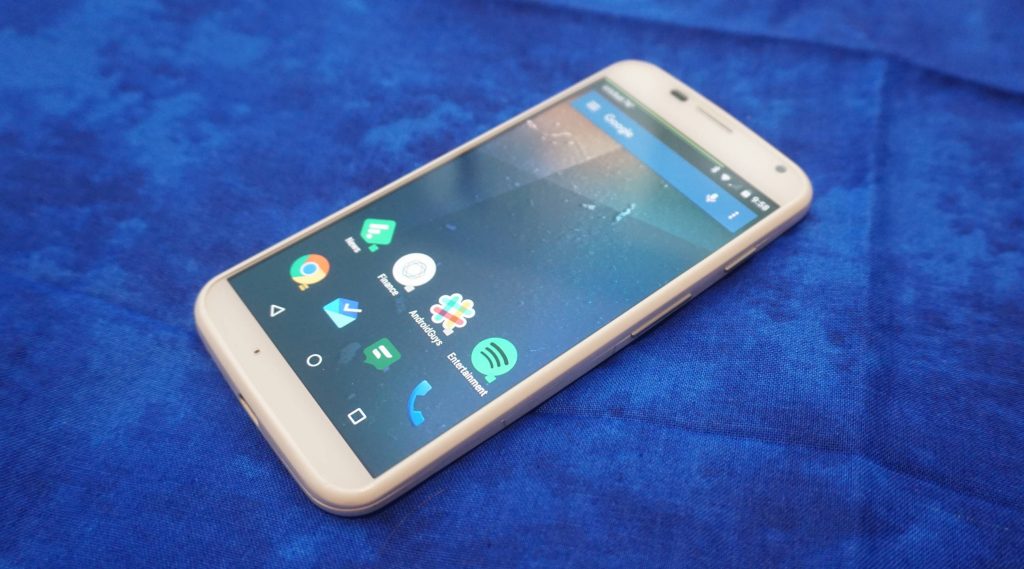 At 720p, the resolution of the Moto X is laughable compared to the 2K or even 4K displays found on most smartphones today, but at a relatively small screen size, the lower resolution is not as noticeable.

Okay, so the screen has held up alright. What about everything else?

I have always loved the way the Moto X sits in your hand while you hold it. The smaller form factor coupled with the rounded back and small dimple below the camera make it extremely comfortable to hold even when you have big hands like me. That is something lost with later versions of the X line. Of course, not everything about the Moto X build is great.

The Moto X is unapologetically plastic, and that might not always be a good thing. Yes, it has kept the weight of the phone low (although a phone this size wouldn’t be that heavy anyway), but long term durability and appearance are a different story. 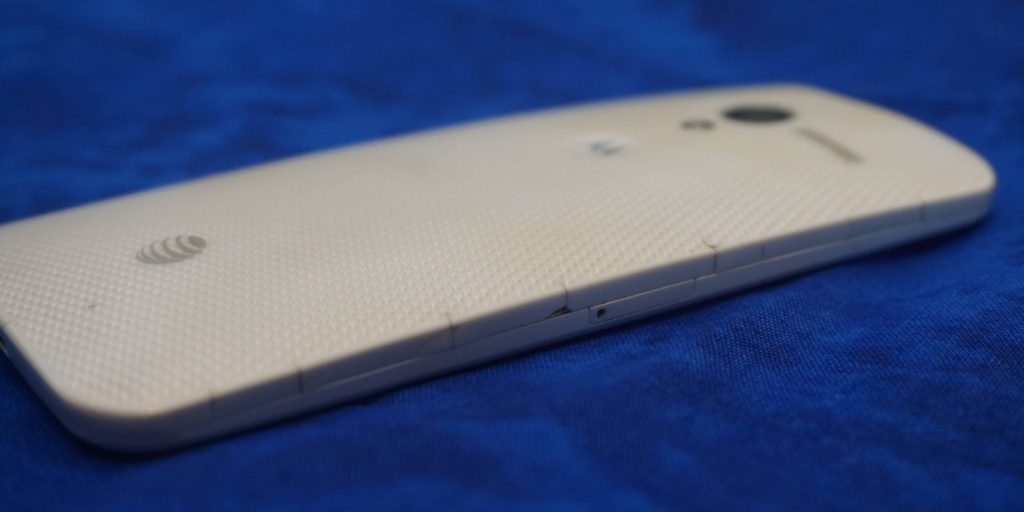 My Moto X has been heavily used, and it has the battle scars to prove it. There are cracks in the plastic along the sides of the phone along with a small piece missing, and the back of the phone is dirty and discolored (thanks in part to the white color). Most of this could be fixed with a phone skin, but the fact is that the plastic build of the Moto X hasn’t held up great over the years.

Anyone familiar with the Android scene in 2013 remembers that the Moto X was a severe departure from the normal flagships of the time. While most companies were focused on competing with spec sheets, Motorola went an entirely different route and built the Moto X with a drive towards experience.

The Moto X comes with a dual-core Snapdragon S4 Pro SOC and 2GB of RAM. Yes, I said dual-core, but don’t let that fool you. The Moto X comes with a custom build natural language processor and a contextual awareness processor that brought along some distinct features. Any phone specifications from 2013 will be wildly outdated now, but even in 2013, the Moto X packed lower-end hardware than pretty much any other flagship. 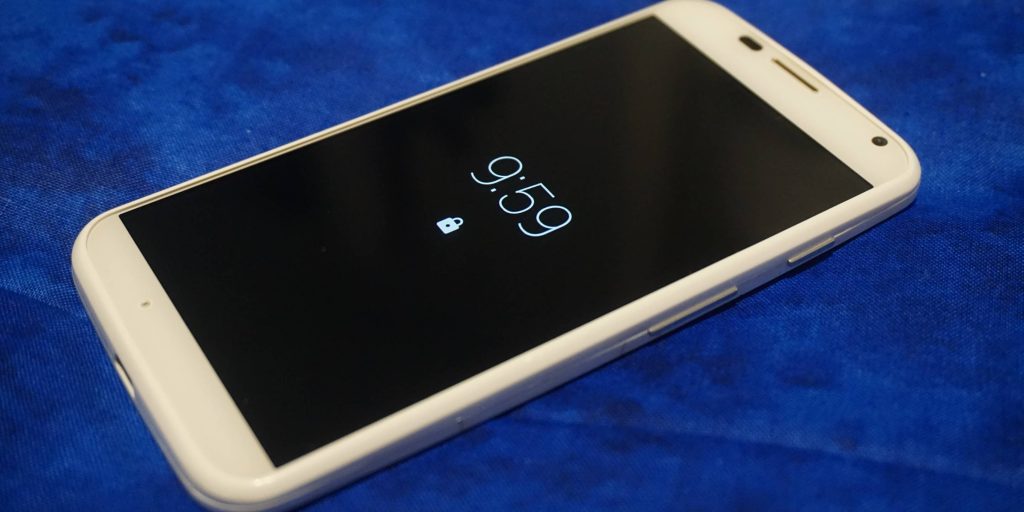 I knew that the Moto X 2013 would feel sluggish compared to today’s phones, but I was actually surprised by how well it held up to my daily tasks. Yes, there were, of course, some stutters and a little bit of lag when switching between several apps at once, but nothing that I thought made using the Moto X annoying or difficult. Opening apps was quick, swiping to type with Google Keyboard was fluid, and scrolling through social media and webpages was surprisingly smooth.

I attribute much of this performance to Motorola’s nearly stock Android skin. The streamlined operating system looks as good today as it did when it came out. Moto did add some extra features to its Moto X, but they are well thought out and useful. The always listening assistant is still my favorite addition with the Moto X after all these years, and I think it is even done better than Google Now on its own.

A close second to the assistant is Moto Display, which we have seen used by other companies in more recent phones. This feature lights up the display when a notification comes in and allows you to interact with the notification without fully waking up your phone. 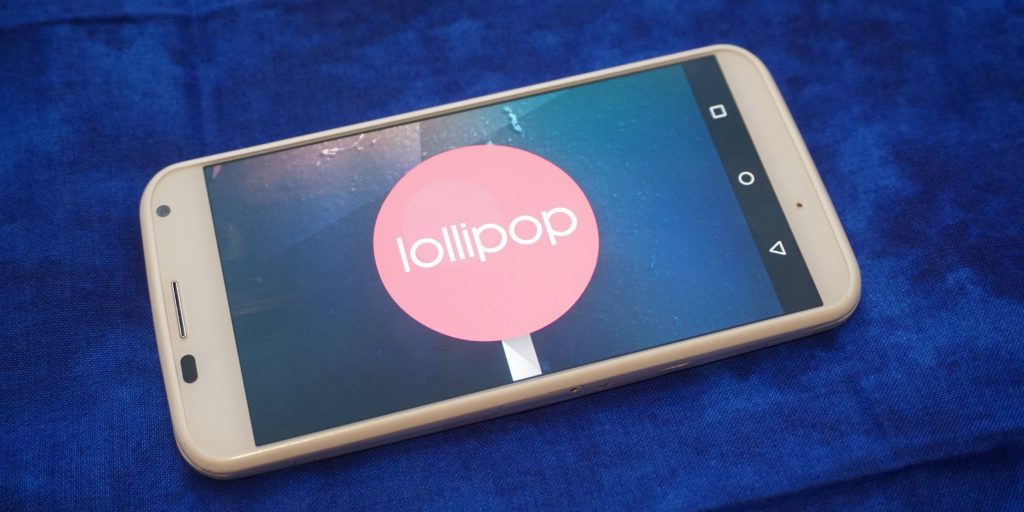 Unfortunately regardless of how stock the software may be, my AT&T branded Moto X is forever stuck at Android 5.1 Lollipop, which means that newer Android features and fixes will not be seen on this phone. I would love to see how well it would perform running the newest version of Android. The curse of buying any phone that isn’t a Nexus…

You didn’t find any problems with the Moto X at all? How much did Motorola pay for this write-up!?

Oh, don’t worry. The Moto X definitely has some problems. One of the annoying bugs that I ran across was that sometimes YouTube videos would just not play. Everything would load and the first frame would be there, but the video itself was just frozen. I thought this might be due to running an updated version of YouTube, but the experience was the same with the default version, too.

I also found that using the camera with the battery anywhere below 30% was grounds for the phone to power off. This happened regardless of whether you were using the camera app or another app like Snapchat. Ironically, you could power the phone back on and still have the same amount of battery left, but open the camera again and back off it goes! After a week with the Moto X, these are the only software bugs I would describe as annoying or frustrating. 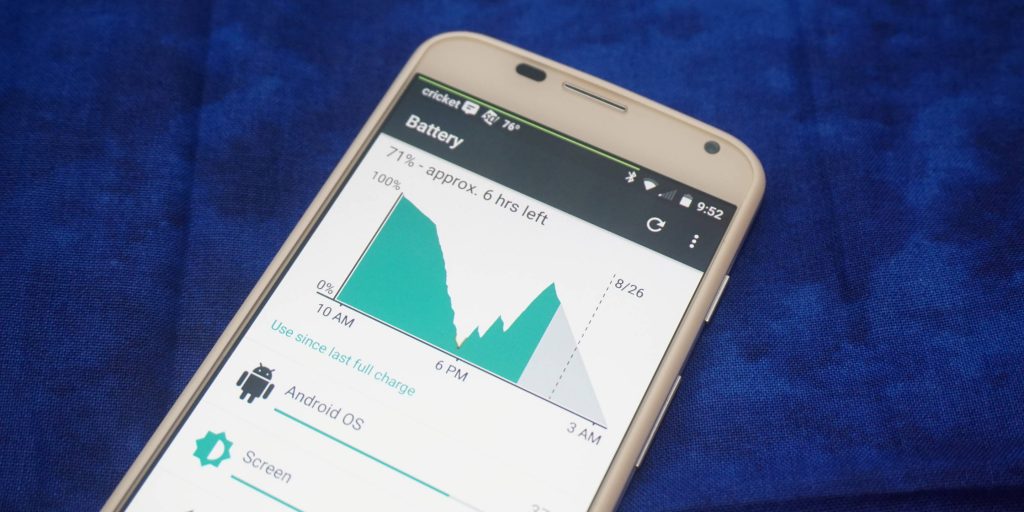 Battery life is another stumbling block that has hindered the Moto X ever since it was announced. The 2200mAh battery was never enough to get the Moto X through a full day of heavy usage. Three years of battery decay later and the Moto X suffers just as much. I could usually get about 2 to 2.5 hours of screen time with the Moto X before it starts begging to be plugged in.

Just like when it came out, the Moto X will not be winning any benchmarking awards. But I was surprised with the performance it showed. Basic tasks were done fairly smoothly with only an occasional stutter or lag. As expected, there are some weird bugs popping up and battery life still suffers, but none were bad enough to fully ruin the experience.

If any of you have ever owned a Moto X, then you should know exactly what I am about to say. The camera is not good…at all. Even when it was first released, camera quality was probably the biggest complaint talked about by reviewers. Detail is poor, low light is non-existent, and overall image quality is just bad. I’d love to say that software updates fixed those problems, but that is not the case. 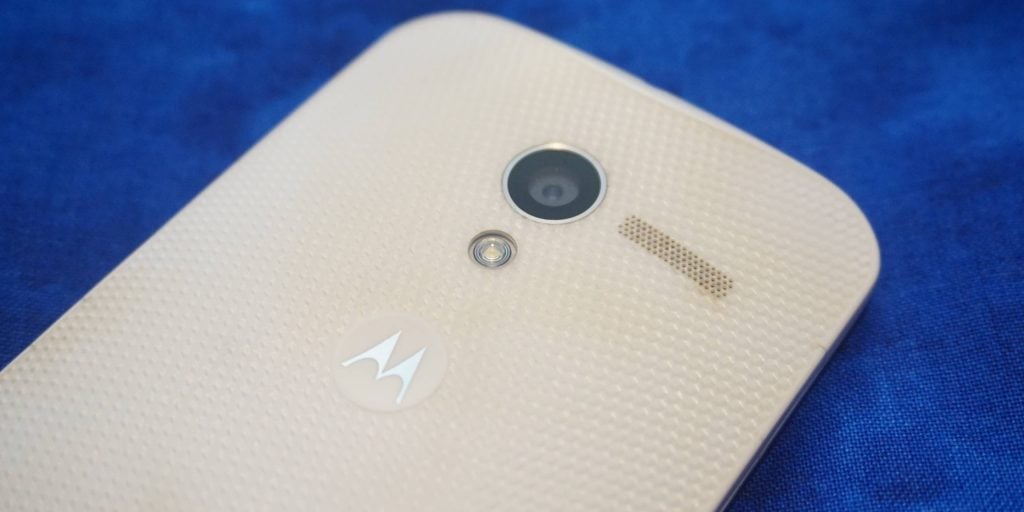 The Moto X comes with a feature that allows the camera to be launched “quickly” with a double twist of your wrist, and while it did launch fairly fast in 2013, the speed would be considered slow today. I wish I had something good to say about the Moto X’s camera, but it wasn’t good when it came out and hasn’t aged well, either.

So I’ve used the three-year-old Moto X for a week, I must be dying to get back to a newer phone, right? Actually, that’s not fully true. Yes, I miss the bigger screens and better cameras of newer smartphones, but returning to the Moto X helped me remember why I call it my favorite phone of all time.

Even after three years, it is a pretty quick phone. The software is still some of the best available (I’d really be missing this if I wasn’t going back to a Nexus), and Moto’s added features like the always-listening assistant are still as convenient as ever. Its size is wonderful for those looking for a smaller phone but still want a decent screen size, and the comfortableness of it in the hand is unmatched.

Problems are abound on both the hardware and software fronts, but I can say with confidence that the original Moto X is still capable enough to serve as a daily driver in 2016. And that’s pretty high praise for a phone over three years old.

Are you currently using an older phone? And if so, how is it holding up? Let us know in the comments below!