Let me take you on a long, meandering journey that started almost a decade ago. Up until 2007, computing has largely been focussed on desktops, by going from a computer that took up an entire room, to a device weighing a couple pounds that you could easily carry everywhere. In 2007, the iPhone was introduced, and like it or not this device changed personal computing forever. With the introduction of the iPhone, computing has been slowly shifting from desktops to mobile. The true tipping point wasn’t until 2014 when website traffic from mobile users began to overtake website traffic from desktop users. 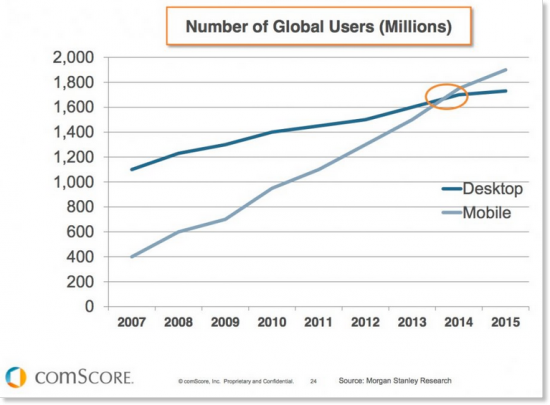 It’s been estimated that by 2020, there will be about 6.1 billion smartphone users, compared to 2.6 billion in 2015. Why mobile? Simple: because humans are mobile creatures. It’s easy to imagine a world where the future of devices will jump from smartphones to wearables (which we’re seeing right now) to implantables, and then a future where we’ll have a computer chip in our brain and the new screen will be our eyes. But we’re getting ahead of ourselves here.

In the 90s, we saw the rise of Mac OS X and Windows, two desktop computing titans that signified what I’ll call Phase One. Phase One dominated for years until Phase Two began in 2007 with the iPhone. Other companies including Google scrambled to compete with Apple on the mobile front, and Android was born. But Android was only competing in the mobile war. The desktop war had long solidified with Apple and Microsoft dominating this space, until 2010 that is.

In 2010, Google developed a new kind of computing device, one that was based on its desktop browser: Chrome. The first Chromebook called Cr-48 was a nondescript notebook designed by Google and manufactured by Inventec. It was part of the Chrome OS Pilot Program and was intended as a reference for other manufacturers; the Cr-48 was not sold to the public.

Google tweaked and refined Chrome OS some more, and in 2011, Samsung and Acer released the first commercially available Chromebooks: Acer AC700 and Samsung Series 5. With Chromebooks, Google could now compete in both the desktop and mobile markets. However, these cloud devices never caught on much, although in the educational space Chromebooks are a cheap and viable alternative to traditional laptops. Google began experimenting with ways to make Chromebooks a more attractive alternative to laptops. Rumors surfaced of a mysterious experiment codenamed Project Athena.

In 2014, just as mobile devices began to overtake desktop devices, curious developers found interesting bits and pieces in the Chrome OS codebase, referring to a “Project Athena“. Athena hinted at a new user interface for Chrome OS, one that contained Android-like UI elements. In the Athena workflow, words like tasks, stacks, cards and windows appeared.

Simultaneously, an update to Android referenced a different secret, this one called Project Hera. Project Hera was Google’s attempt to merge Android, Chrome and Search into a unified user experience. The special Chromium build was meant to run on Android and execute tasks through the web for both Google and third-party apps.

Although Project Athena eventually got canceled, we saw Hera fully baked into Android 5.0 Lollipop. Hera replaced the old multitasking feature of Android, combining Chrome tabs and apps together in a card stack. Lollipop also revealed a new design language for Android, called Material Design. But something was still missing. The secrets found in Google’s code didn’t add up to what was publically released.

Hera explained Android Lollipop. Project Athena got canceled, but what was it supposed to do? What was it hinting at? Over the years, Chromebooks have become more refined, with Google releasing a new standard of Chromebook called the Chromebook Pixel, and most recently the Pixel C. This is where things get interesting.

The Pixel C was probably meant to compete with the iPad Pro and Surface Pro. As some have noted, there is no “pro” in Pixel. Android isn’t specifically built for productivity. Chrome OS was, but Chromebooks haven’t become as popular as Google wanted. Google tried to fix this by bringing a limited number of Android apps to the Chromebook, but these are only a handful of the millions of Android apps.

With Android 6.0 Marshmallow, we saw hints that Google was testing a multi-window mode in early builds. The feature was described as “highly experimental,” and Google evidently decided it wasn’t ready to ship in the final 6.0 release. The Pixel C was discovered to have an unusual aspect ratio for a tablet: 1√2. This is comparable to a sheet of A4 paper, which means the Pixel C screen could split the in half and still have both halves maintain the same aspect ratio, and so on.

Why would Google create what’s effectively an Android laptop when the OS itself isn’t fully ready for that? Was the Pixel C meant to be a Chromebook, or an Android + Chrome merger?

Like two halves of an Oreo cookie, it has long been suggested that Android and Chrome might eventually merge. Both operating systems are based on Linux, and since Android is now the world’s most widespread operating system, this might give Google the edge it needs. Let’s dive into the code once again.

As recently reported, in the Android N Developer Preview it was noticed that there is a hidden “freeform window” mode. Just like a desktop OS, Android could some day display apps as resizable floating windows. We saw with Remix OS that a desktop-like Android experience is possible. Google has won the mobile battle, at least in terms of the number of users. But you can win the battle yet still lose the war. Android N may bring with it new features to start us on the road to Android O. We’ve already talked about some of the new features, but Android N will not be the merger. But Android O might. Google could approach Android O in a number of ways. By emulating Microsoft, Google could develop a version of Android that works the same on phones, tablets and laptops.

Could we see a Pixel phone?

Google could also emulate Apple by having Android as the mobile OS and Chrome + Android as the desktop OS. There would certainly be benefits. Unless you have a Nexus device, Android devices are notorious for being fragmented and slow-to-update. In contrast, Chrome OS receives updates every six weeks, or even faster when it comes to critical security patches. Could we see Google take Android from the hands of third-party manufacturers and make a Pixel phone?

Now we can fantasize. What would a desktop-class Android app look like? Now that Android is mostly 64-bit, they’re getting more powerful and quickly catching up to their desktop brethren. Even games, like this new app called ProtoStar that was built with Unreal Engine for the Samsung Galaxy S7. Check out this video:

If Google successfully released a version of Android – maybe N or O – that had multitasking, windowed apps, split-screen apps, etc., and built a tablet around that, it could finally compete with the Surface Pro and iPad Pro. The new Pixel Pro tablet could be a big hit, and would bypass the limitations of a Chromebook, such as having only 16GB of storage, or web apps that will never be as powerful as their system counterparts. There could be seamless integration between Android phones, tablets and laptops/desktops.

I want an Android laptop, with everything synced to my Android phone. This could make me switch from iOS to Android. Right now, my computing devices are an iPhone and a Windows laptop, and we all know how awful they pair up. But give me a Pixel Pro and a Pixel phone (Project Ara) and I’ll become your faithful follower, Google. Until then, one can dream.