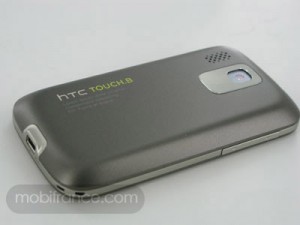 We don’t have much to go on with this one yet, but we could be looking at another Android handset from HTC.Â  As pointed out by Engadget Mobile, it doesn’t appear to have the prerequisite buttons for a Windows Mobile device, leaving Android as the logical OS under the hood. The lettering is Android green, right?Â  That has to count for something.

According to MobiFrance, this Touch.B was previously reported with the codename of “Rome.” With no specs, price, release date, carrier or anything worthwhile, we have to wait for the juicy details.Â  Wait and hope.

Even though this bears more than a passing resemblance to a Droid Eris, we’re crossing our finger that this is the Dragon or something in the 1GHz realm.Â  Everyone else has started moving the needle and HTC’s own Touch2 has us green with spec envy.Â  It’s time to share that type of hardware with us Android fans.