Google recently introduced an app in the Play Store called Files Go which is designed to help you free up space on your handset. Officially it’s in “beta” and unreleased status which means it can be buggy or have a few issues here and there.

A lot of smartphones come with some form of file manager, giving users the ability to quickly find images, videos, and other files. Strangely enough, Google hasn’t given us one of those in its Nexus and Pixel phones. Locating pictures, documents, and email attachments isn’t done in one central location. Users must open Google Photos, for instance, to find a specific pic; head to Google Drive to locate your important spreadsheet. 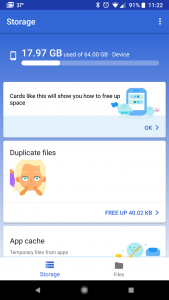 Now, with Google Files Go, we have an app that lets us go through our devices so we can organize files. At around 6MB, it’s a lightweight app that helps quickly pull up files so that we can manage or share them.

Additionally, the app can help you keep your phone lean and clean, freeing up space along the way. Should you have duplicate files floating around Google will identify things to you can trim the fat.

Another option that some might find handy is the ability to share files offline other users. The app essentially creates a local and temporary hotspot which lets two Files Go users send or receive files to and from.

Perhaps the coolest feature, Files Go will help you can recognize rarely used apps and games. In the event you’re running low on storage, the app can signal which titles you might want to uninstall first. 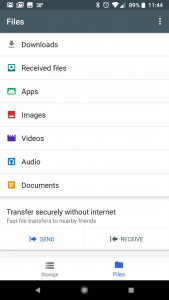 Upon opening Files Go you will be presented with a number of cards, splitting up the various functions of the storage side. You’ll have an at-a-glance view of app cache, unused apps, duplicate files, and more. It’s not unlike how Google Now looks on a phone.

At the bottom you’ll have the option to tap “Files” which basically provides a clean interface to locate downloads, apps, images, videos, audio, documents, and received files. It’s also here where you would set up the local transfer of files to another user.

Chances are good that if you have a non-Nexus or non-Pixel device, you might already have a file manager. This may be all you need or want if you’re looking to locate docs and media. Moreover, there are a bunch of quality apps in the Play Store which do a great job of handling these sort of tasks.

If you have a Google phone and run the stock software, you probably don’t have a file manager. Should that be the case, we definitely recommend giving the app a shot. You might not use it all that often, but it’s a great all-in-one tool for keeping your phone in optimal shape.

To us, this app is a long time coming for Google devices. As we see it, once Files Go is out of beta and fully ready, this is one that should be baked into the standard suite of apps. We like what we see so far and feel it will be among the first titles we’ll download on future phones.

Note that while Files Go is in beta it may not be available in your country or for your device. We found it is compatible with the Pixelbook but not for tablets. This should change as Google further develops and iterates the app.