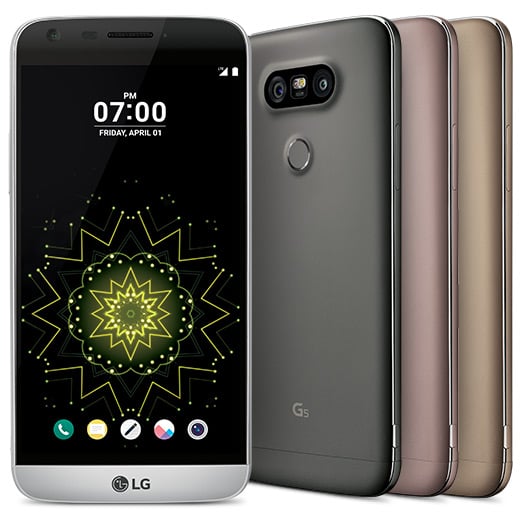 LG jam-packed the unveiling of the G5 with a LOT of goodies. At the base of it was an innovative modular design, which opens a lot of doors (potentially). Let’s run through what you may have missed from the ambitious announcement.

I don’t think anyone missed the fact that the G5’s bottom bezel can drop like an ammo clip; allowing access to a swappable battery despite the phone’s all-metal design. This is the first time we’ve seen a production phone with modular hardware, and it’s fantastic.

However, you may have missed all that the functionality entails. LG showed off two components that are ready for prime time – the LG CAM Plus (which brings physical camera controls and an extra battery) and Bang and Olufsen 32-bit HiFi DAC module.

The good thing about this is that we’ve never seen phone hardware add-on’s before, but the bad thing is that there aren’t a vast array of options. If you don’t care about the camera controls or HiFi audio, then you’re merely getting teased about a promising feature. Fortunately, LG has said that third-party manufacturers are open to creating a module, but who knows if any will take them up on it.

Thankfully, the announcement consisted of other neat accessories, meant to complement the G5 experience. LG dubs this initiative as LG G5 and Friends. The lineup includes:

Click here to read about the LG G5 ‘Friends’ modules 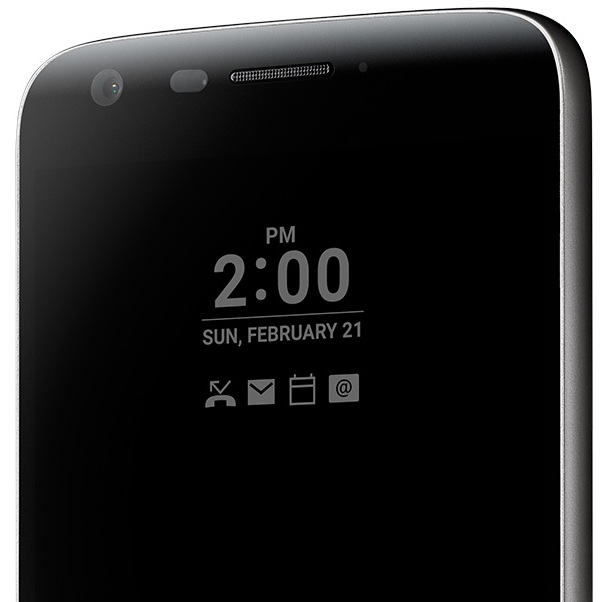 The G5 continues to use an LCD screen, but LG still incorporated an Always-On display (information that stays on the screen while the phone is on standby). We caught wind of the feature prior to the event, so some were guessing that LG was moving to OLED display technology (which is more suitable for Always-On, as it only has to light up the pixels that the content uses).

Nope. It’s still an IPS LCD screen. But LG has found a clever way to sidestep the battery concern – by only activating a third of the display. LG says that this method will only drain the battery by 0.8% every hour.

What’s more, LG is taking advantage of the feature on its next Quick Cover case. Prior to the show, the company let slip the G5’s touch-enabled Quick Cover case with a cut-out for the Always-On portion of the display. 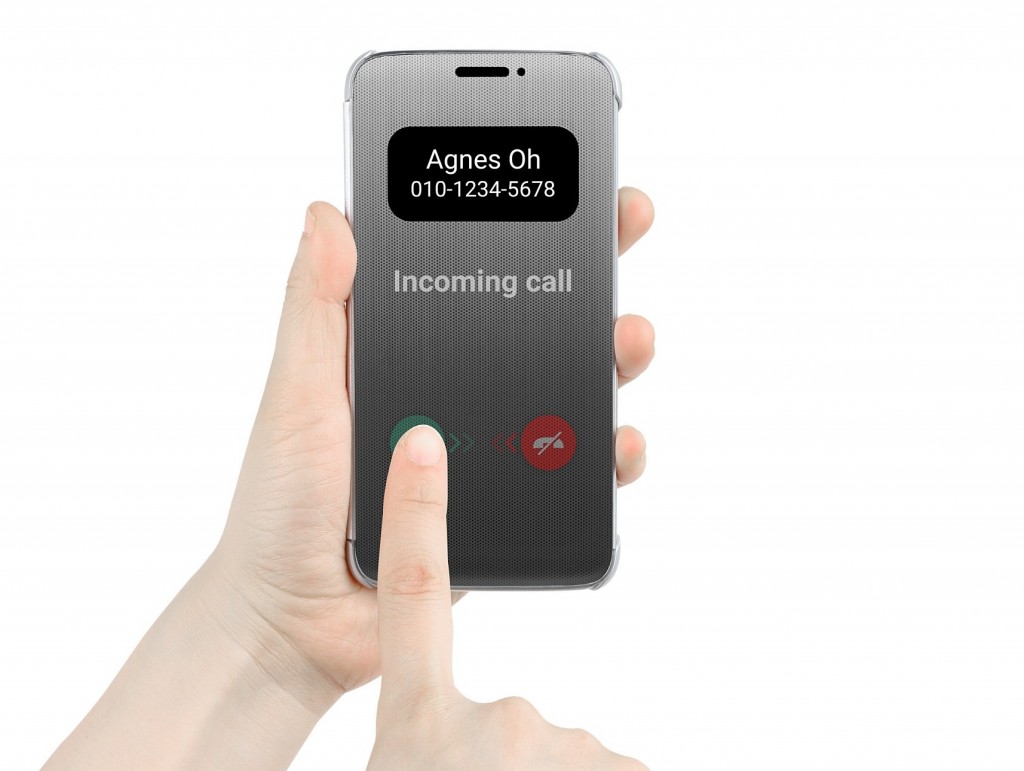 The G5 apparently had a bit of an identity crisis, because its screen shrunk down to 5.3″ from the established 5.5″ size in the past two years. This means that the battery capacity had to take a slight hit, unfortunately. It’s down by 200mAh from the 3,000mAh battery in the G4, to 2,800mAh. But the swappable battery ability means that it’s not the end of the world. Let’s just hope that LG is generous enough to include an extra battery in the package.

Folks who also value expandable storage weren’t left hanging. Unlike the Galaxy S6 last year, LG didn’t forget the micro-SD card slot in its overhauled design. It has a place next to the SIM card on the side pop-out tray. 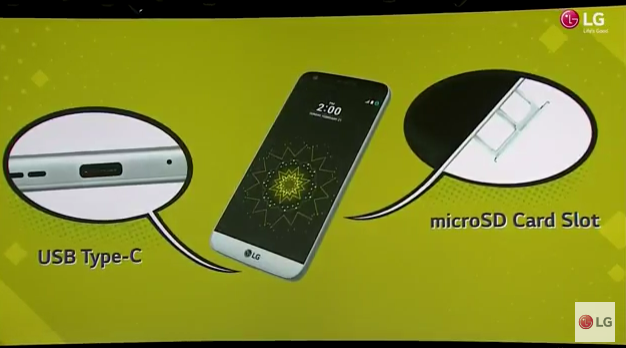 You’ll still get expandability up to a whopping 2TB, just like LG’s preceding flagships.

On the V10, LG debuted an interesting dual-camera setup on the front of the phone. This wasn’t for some gimmicky 3D effect, but rather gave the user two different lens angles to choose from when shooting selfies. 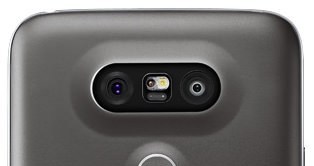 The G5 took that concept and moved it to the back. There’s a 16MP (f/1.8 aperture, OIS) sensor that does a more standard 78-degree field of view and the other is 8MP with a 135-degree wide angle lens, which LG says is the widest lens available on any smartphone camera.

You may have missed what’s on the front. We’re told that it’s another 8MP shooter, but don’t know anything else about it (such as the aperture size).

Most of the attention was on the G5’s modular ability, but that may have distracted from the other aspects on the chassis. First, that prominent fingerprint sensor on the back is very reminiscent of LG’s work on last year’s Nexus 5X. It supposedly functions in the same way too, by turning on and unlocking the phone with a touch.

And you may have noticed that the volume buttons are no longer on the back (a design staple since the LG G2). To prioritize other features, LG put the volume rocker back on the conventional side placement.

Users that like to be on the cutting-edge should appreciate that LG didn’t forget about the newest USB Type-C standard (like another major manufacturer did, *cough, Samsung, cough*). Along side it, you’ll see a bottom-facing speaker.

Lastly, if you didn’t catch all the G5 color choices, here they are: Silver, Titan (dark grey), Gold, and Pink.

It’s a given that the G5 will land with Android 6.0 (Marshmallow) out of the box. But you may not know about the newest form of LG’s UX user interface.

It’s still there, but LG claims that it’s lighter than before. You should now be able to see more elements of Material Design to shine through. Some of the UI’s bloat was reduced, such as the removal of LG’s Q Slide apps. Also, the Settings layout was restructured, hopefully making it less cumbersome to navigate.

The software conversation can’t go on without mentioning the controversial exclusion of the app drawer. LG claimed that a survey determined that users wanted a more simplistic UI experience, which translated to ditching the app drawer. You may not need to fret though. According to XDA Developers, the app drawer button is merely not shown by default and can be resurfaced.

We’ll have to wait and see what the whole deal is when we get our hands on a review unit.

No one can deny that LG’s modular phone design is pretty freaking rad. But a hamper may be that it doesn’t have much to offer, for now at least. And who knows how much extra those modules will cost.

Fortunately, there’s other advances going for it, such as an Always-On display and USB Type-C. But is it enough? Would you have liked to just see an evolved V10? We’d like to hear your thoughts on the G5 in the comments section below!