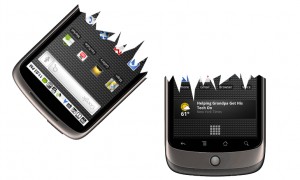 The Nexus One, while being a very good Android device, has some issues. It is starting with the ordering process with Google and the upgrade eligibility with T-Mobile. There are also reports of signal quality with 3G as outline by Gizmodo. The Nexus One is made by HTC, distributed by Google and subsidized by T-Mobile, so who is responsible for technical support, software updates and contract conditions…?

For the Nexus One, rate plan related ?’s should go to your carrier. Hardware/software support, please reach out to HTC http://ow.ly/UnTI

Again, if you need hardware/software support with Nexus One, please contact us (HTC) via http://ow.ly/VemJ

They takeÂ responsibility on their part of the deal, which is nice. Then, we can only assume that the 3G problem a lot of users areÂ experiencing will be resolved with a software upgrade from HTC.

It seems the problem with the confusion came from Google who didn’t communicate about this, they could have done it from the Nexus One’s page.Â Also, T-Mobile was not ready to deal with the specific of customers already on contract with them as outlined by TmoNews.

Unfortunately, once again, this highlight the fact that carriers don’t care much about existing customers and prefer to be nice only with potential new ones! Google wantÂ to change the game by distributing the phone themselves but until there is an infrastructure in place (WiFi everywhere or use of white spaces) to do without them, we still have to deal with carriers!