Earlier today, Google dropped a bombshell. Co-Founder and CEO Larry Page, released a State of the Union, in which a slew of changes were announced. The biggest of which was the re-organization of Google.

Larry Page will be stepping down as the CEO, and named Sundar Pichai, head of Android and Chrome, as Google’s CEO. Now, before running all across town saying that Sundar’s the man in charge now, he is, but there’s a catch. Larry Page and Sergey Brin have founded a new company, Alphabet.

Within this umbrella company, things will be run much differently than they currently are. Projects like Google, YouTube, and Google Ventures, will be broken into separate companies underneath the Alphabet umbrella. Hence the “G is for Google” on the abc.xyz blog post.

With this realignment, more changes need to be made, and one of those changes was to name Sundar Pichai as CEO of Google. This is not earth-shattering news, based solely on the increased responsibilities Mr. Pichai has undertaken, such as taking the lead on Android after Andy Rubin left in October of 2014. But if you’ve looked in to Sundar’s background, you will find some signs that this was a long time coming.

After joining Google in 2004, Pichai worked on numerous products, ranging from Google Chrome to Google Maps. He was also instrumental in the successful launch of both Google Drive, and Chrome OS. Pichai also helped create a new video codec by the name of VP8 which turned into the WebM video format used in Chrome. Needless to say, he was fast-tracked to the top, from the beginning.

Due to the large success that was found with almost everything Pichai touched at Google, his name was one that was swirling around the water-cooler in regards to the new CEO of Microsoft in late 2014. Since then, he continued to grow both the Android brand, as well as Chrome, and continues to make improvements on both platforms. 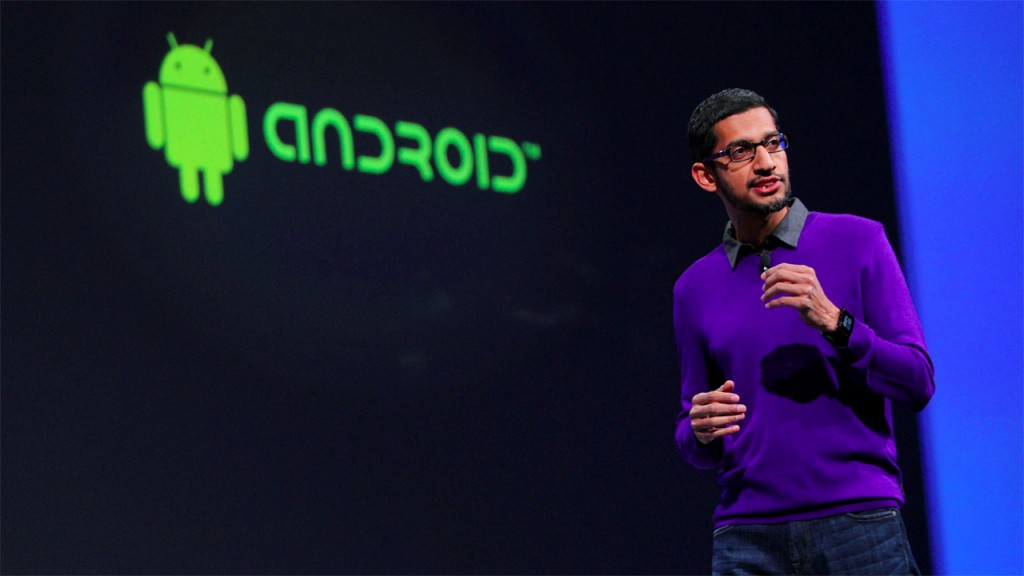 Just a few months ago, it was Pichai on stage at Google’s annual developer conference, Google I/O, where he announced Android’s latest foray, Android M. Along with Android M, there were a few plans set in place to continue to develop the Chrome browser into the end-all-be-all browser. A few of those changes to the Chrome browser have been making their way to our devices already, if you’re using the Chrome Beta application on your mobile device, such as having custom tabs within Chrome.

Regardless of that, now Sundar Pichai has his biggest challenge ahead of him. While Larry Page states that Google is now “slimmed down”, Pichai will still need to keep the ship chugging along and innovating in the process.

Speaking of that slimming down process, what does this Alphabet business, really mean? To the average person, there probably won’t be any type of immediate impact, and there may not be any type of impact at all. But what Alphabet promises to do, is huge for everyone, including the non-geeks.

Google, as big as it is, has been cut down a bit. Trimmed into more manageable slivers, with different people at the helm of those divisions. At the top of Alphabet, you will find Larry Page as CEO, with Sergey Brin as President, and Eric Schmidt as Executive Chairman. The current board of directors found within Google, will now become the directors of Alphabet.

Page describes the CEO separation changes as such: “In general, our model is to have a strong CEO who runs each business, with Sergey and me in service to them as needed.” This is where the dynamic duo of Page and Brin got their base to name individuals such as Pichai and Susan Wojcicki as CEO of Google and YouTube, respectively.

By essentially “splitting” up the companies, while still operating under an umbrella company, this will allow more focus to those special projects. While at the same time, allowing Page, Brin, and Schmidt to focus on projects like Google Fiber, Google X, and others. This also hopes to bring innovation to those in charge of other divisions and sections of Alphabet, while still giving some type of control to the Big Three at Google, Alphabet.

Also announced today, was in regards to how Alphabet would affect the stock market, and those who hold any shares in Google. While Alphabet will be keeping the same trading names as Google did, GOOG/GOOGL, the parent company will now separately report Google’s financial results. This, in turn, will give everyone a better grip about how the company is really doing.

As a side note, and a bit of a fun one, there is a hidden link within the post from Larry Page. While describing some of the fun things that Alphabet will allow Page and Brin to focus on, Page makes specific mention of X Lab. X Labs “incubates new efforts like Wing, our drone delivery effort.” Well if you tap the period at the end of that sentence, you are redirected to another page.

We are such stuff as dreams are made on

This link brings you to a page based on Silicon Valley, the hit TV show on HBO, about a bunch of geeks in, you guessed it, Silicon Valley. While it’s not really known how this ties into today’s announcements, it’s a fun little tidbit to look at and see what it’s all about.

Let us know what your thoughts are on today’s events by dropping us a line in the comment section below. Is this a good move for Google, or could things end up spiraling out of control if not handled correctly?