For this second day at Mobile World Congress here is an overview of some of the Android devices presented on the show by manufacturers (not in any special order). Rather than giving again details of the specs, possible released dates I will just give my impression on each devices I was able to see or touch.

HTC: As you know HTC announced this morning 2 new devices. I have a meeting with HTC tomorrow so you will have more details on both devices. First impression, the HTC Legend is a very nice update of the Hero, the aluminum body makes it very sturdy and of a quality level we are expecting from HTC. The HTC Desire is really a twin brother of the Nexus One with just slight differences, a very good device.

Motorola: We already had a video yesterday on the latest from Motorola but to come back on their latest models, the Motoblur enhanced devices, probably because of Android 1.6 don’t seem as good as the MOTOROI and the XT800 and MT710. These three, only available in Asia, have been polished by Motorola to be better than the devices from their competition on the Asian markets and you can feel it.

Samsung: Lots of space on Samsung’s booth is (sadly) reserved for the Wave… but hidden in corners they had the Galaxy Spica, a great looking phone that will have different colors back covers (red, white, black and a beautiful Android green). It is a very well made device. The other very interesting device is the i8520 (Beam), which includes a Pico projector and an AMOLED screen, to be released middle of 2010. I personally think this is a great idea to have a projector in a phone.

LG: The LG GT540 is another Android 2.0 device released in few colors. It has a nice form, slightly different from other brands though and it does not look as solid as for example a HTC Legend.

Acer: There were 3 devices presented by Acer, The affordable beTouch E110, the beTouch E400 and the new Acer Liquid e. The Liquid e, looked much faster and snappier than the other two mostly because it has a capacitive screen and you will get less missed swipes that you would on a resistive screen.

Sony-Ericsson: 3 devices presented, one we almost know everything about… the X10, it is going be released in March, so they said and the new X10 mini and mini pro. Now, all 3 devices are high quality, as expected from Sony-Ericsson and the choice would be on the type of devices you like: large device with big screen, small and light device/with or without a keyboard but still with all the features you will find on the larger model.

On the subject of the keyboard on the X10 mini, it is small so if you consider this device rather than the version without keyboard I will suggest to try it before to make sure you will be able to use it. In terms of price, without giving any specific details, Sony-Ericsson said that the prices of the X10 mini and X10 mini pro will be very similar and should not become a factor of choice.

ZTE: They had a number of Android devices, not many differences between each other than the usual camera and screen sizes. Some had resistive screens, others capacitive. They are really offering a great range, but they didn’t have many details on pricing and availability. See the photos in the gallery below for a better overview.

Huawai: 3 Android smartphones presented by Huawai, Razor, Smooth and Blade. Again, same as with ZTE, very little details on these devices. The build quality felt a bit lower compare to other brands. 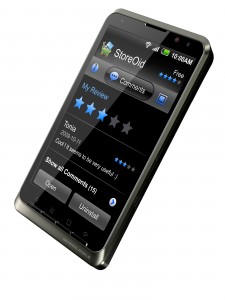 General Mobile: Some nice devices, they have for example, a dual-sim cards device, apparently there is a great demand for these in Eastern Europe. All their phones are running a customized version of Android. Also, General Mobile has its own apps store, again to fill a need for their Eastern European clients who don’t like credit card payments and prefer to get billed for the apps on their provider monthly bills. I will give more details on these in these in the next few days.

Conclusion: This is only an overview and there are plenty of devices I haven’t mentioned. You will quickly realize that, apart from few exceptions, they are all the same and the choice you have is more down to the availability in your country and with your carrier.
Then, as you can see from this list, the predictions that have been made for the numbers of Android devices to be released in 2010 is getting very real.

Here below is a gallery of photos from today with few extra not related to Android but interesting to see. If you have any questions, please add a comment and I’ll do my best to answer.