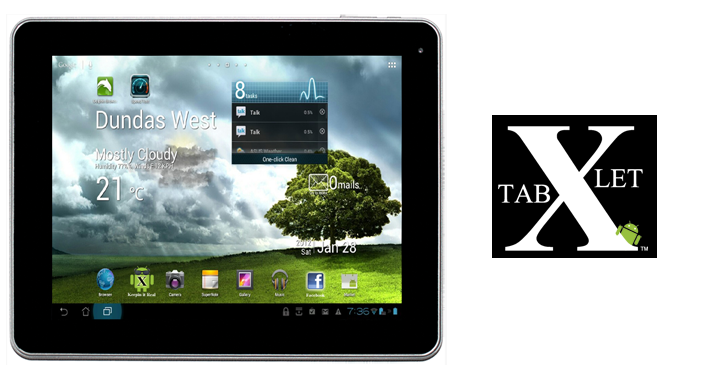 What we liked:  The stock Android 4.0 experience is always nice as it keeps us from too much bloatware or extra software touches that sometimes get in the way of seasoned users.  The HDMI port, microSD expansion, dual cameras, and pair of mini USB ports should be enough to keep developers or tinkerers busy for a while. It’s not a completely closed off environment and it’s one of the nicer devices we’ve seen from a “no name” brand.

Room for Improvement: It’s going to be tough to sell this device at $299 against bigger companies with more advertising capabilities.  We would have liked Android 4.1 Jelly Bean but it’s not a deal breaker. We’re used to higher resolution displays in our larger tablets and the 1024×768 looks a little fuzzy when compared directly to others.  Button placement and ports are a little wonky and take some time to get used to

Review at a Glance: As you might expect, the X Tablet is not the iPad killer or best thing we’ve ever seen, however it’s hardly the worst or “most generic” tablet we’ve encountered along our way The $299 sticker is going to be a tough sell when consumers will be happy to spend just a few bucks more for a name-brand device.  On the other hand, we’re increasingly seeing more people opting for a lower-cost 7-inch experience.

The lack of Google Play and its software suite is a tough pill for some to swallow, however Amazon Appstore, GetJar, and other alternatives can step in nicely at times.  The model we tested was unlocked and rooted out of the box, something which developers and hackers will surely love.  Also this ensures crafty users can get their favorite apps sideloaded as well.

Our hope is that these get into a retail presence of some sort, as the word of mouth won’t be strong enough in an online capacity.  Because it’s from a ‘little guy’, the X Tablet faces a tough challenge against companies willing to spend on advertising and retail partnerships. If only this guy arrived a few months earlier…

We really liked what we see here and think that the X Tablet is a great start for a company looking to get their foot in the door.  Even without a retail presence we still hope to see this model go a little bit viral and help establish a new brand.  With the $200 and below market a pretty tight race, there’s room for a number of players to grab a slice of that ever-growing pie.

With its 9.7-inch display size, somewhat foreign (for Android) aspect atio, and silver backside, the X Tablet looks more like the original iPad than anything we’ve seen.  Assuming you hold it in landscape mode, the device has all the of the ports and power button along the right hand side of the tablet.

Across the top, however, you get volume rocker and a “Back” button for Android. Yes, it’s strange to have, and in an even more strange place, but it’s there.  Deal with it.  It’s tough ignore it as you reach up there for adjusting volume levels and your finger inevitably finds it.

Speaking of ports, the X Tablet offers users plenty of connection and expansion options, including microSD, HDMI-output, a pair of mini USB ports, and headphone jack.   While we appreciate the 16GB of storage, we like being able to add in our memory cards with music, photos, and other media.

The X Tablet features an IPS display running at a resolution of 1024×768 which is great when you look at it on its own.  Put it up next to a higher resolution device, however, and it feels grainy. To a certain degree this is analogous to the entire experience.  Pick it up by itself and it’s a pretty wonderful device, but when compared to the other guys, you see little shortcomings. That said, the display works well in all the lighting conditions we tried this week, even performing as good as others when in sunlight.

The rear and front-facing cameras are offset to one side and can feel awkward the first time or two.  We’d like to see the front camera centered, but, considering how often we really use cameras on tablets, we’ll make exceptions. The shutter speeds are slower than we’d like and there doesn’t seem to be much autofocus for the rear, but colors are pretty exact.  Again, I hardly reach for the camera on a tablet, but that’s certainly worth knowing.  You might not want to break this out at the weekend soccer game for still photos.  Video, on the other hand, seemed pretty good in the few tests and would work in a pinch. 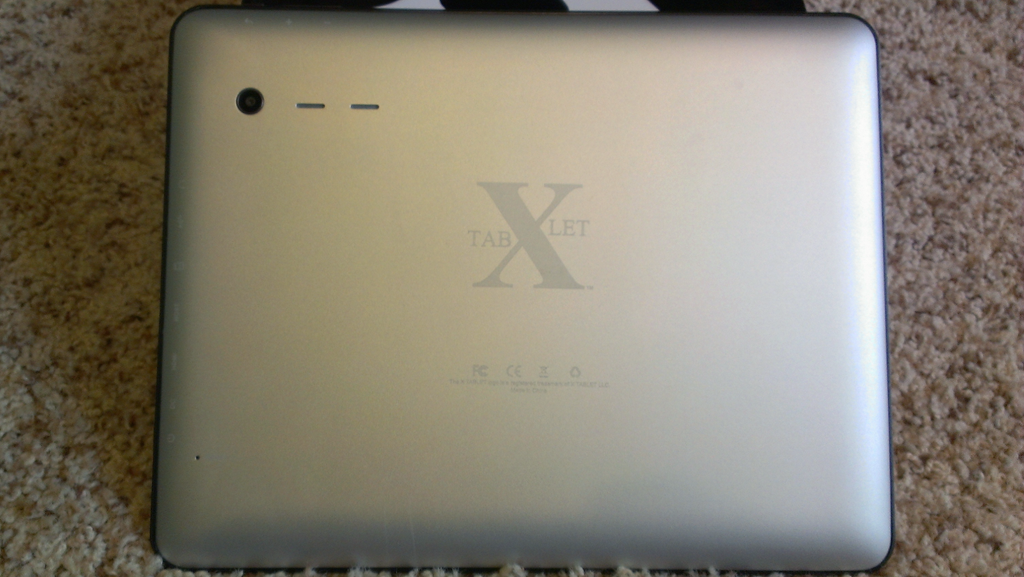 Like the rear camera, the speakers are also set off to the side of the tablet, and feel oddly placed.  They sound decent enough on music, YouTube, and games but we’d rather see them on the side edges or front. Keeping that in mind, we ultimately got comfortable with where the speaker was on the Nexus 7.

As we indicated above, the X Tablet comes with the standard Android 4.0 Ice Cream Sandwich build.  We’d like to say there’s no additional software, however that’s not the case.  There are just a few apps loaded, many of which are common for e-readers and low-priced tablets.  Ours came with Angry Birds Rio, Amazon Appstore, YouTube, Aldiko, and a few other settings apps.

It’s quite strange for semi-experienced Android users to log in with a Google account to get started only to find there’s no Google Play, Gmail, or other standards.  Where do you get apps?  Amazon Appstore is getting better all the time and can often be the only source a new user needs.  Point the browser to GetJar or another alternative and you’ll be off and downloading all kinds of stuff.

The X Tablet we reviewed arrived as an unlocked and rooted device, meaning we were free to do pretty much whatever we wanted.  This is great for developers and tinkerers who like to bend things at their will, trying to get a little more out of the device. This can also be a good way for users to side-load an app or two.  We were advised that the X Tablet will not come unlocked and rooted as a standard feature, but consumers will be able to choose that as an option when purchasing.  No word on if this will cost anything extra.

The litmus test I often apply to a device is to simply hand it to someone else and say, “What do you think of this?”  In most cases this helps me get a feel for what a general consumer might say or think about a particular product.  The first reaction I got this time around was more of an, “Oh, this is kinda cool.”  After a few minutes with the X Tablet,  I noticed that they seemed to get lost or bored once they realized there was no Gmail, Google Play, or Facebook client. Once I explained that it was possible to get around these barriers, they opened up a bit.  Side note: Telling someone that they can side-load apps or actually installing stuff from time to time can get tedious.  It’s like getting your hands on a video or album.  Be prepared to hear stuff like “Make mine do that” or “If I brought mine over, could you do those things to mine?”

If you’re looking to pick up an e-reader, tablet, or hybrid device the X Tablet is not the worst thing you can do. Unfortunately, consumers are increasingly getting more for their money and products like the Kindle Fire HD, Nook HD, and Nexus 7 are what people are buying.  It’s no surprise that each has permeated general consumer awareness, considering each is backed by a huge company.  The X Tablet comes from a “no-name” company that doesn’t have a ton of experience.  Keeping that in mind, we had a hard time seeing stuff we absolutely didn’t like or could “deal” with.

As is the case with pretty much every product that comes along, the determining factor is whether or not something is worth the money.  At $299 the X Tablet is not a bad option on its own and I suspect the average buyer would be moderately pleased.  It’s not ground-breaking hardware and the specs might be a few months behind the bigger guys.  On the other hand, it’s something we can see developers playing with as it has more flexibility in the expansion and port department.

If the price were only $50 lower I would feel much more comfortable with giving this a full pass.  Being someone who expects a certain experience from Android devices, it takes some getting used to.  It’s not an insurmountable challenge, but it’s more than some new tablet users might bargain for.

One of the biggest challenges that a company faces in the Android space is the inevitable comparison bigger, more familiar brands.  Many consumers will gladly pay a little more for something they have seen on TV or in print.  The problem for the little guy is that it’s hard to become that established brand without advertising capital or retail help.  That said, I’m reminded of the dilemma of getting a line of credit.  It’s hard to have someone hand you X number of dollars until you’ve proven you can pay it back.  Or think in terms of job experience.  How can you convince a potential boss to take a chance on you if they want someone with something under their belt.  At some point, everyone starts somewhere.  Based on what I’ve seen in the X Tablet, I believe that this is the start of a quality brand.

Before considering this, or any other tablet, ask yourself what kind of user you are or plan to be.  If you’re all Amazon then the Kindle Fire HD is the way to go.  If you’re all Google and don’t know a lot of about side-loading or customizing, then you’ll want something from Samsung, Asus, or another player.  If you’re someone who like to flash ROMs, side-load apps, or develop, then the X Tablet is worth a look.  Realistically, the biggest issue we found here was that it arrived after the new Nook and Kindle stuff.  Were this but two months earlier (heck, one), this 9.7-inch tablet would stand a better chance.