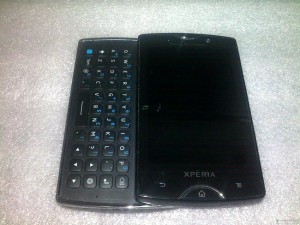 Another pair of images for Sony Ericsson’s purported X10 Mini Pro successor have made their way online, giving a decent look at both the front and back of the device.  As one might expect,  the phone still looks to be among the smallest Android phones whenever it debuts. The keyboard has been juggled around considerably but still remains a 4-row sliding QWERTY.

The back of the phone has an ‘HD’ mark on it leading us to believe that it will be capable of recording at least 720p video.  Taking that into consideration, we might expect at least 5-megapixels (same as previous iteration) or maybe even 8-megapixels out of the camera.  Other rumored details include Android 2.3, a 1GHz processor with separate GPU, and a 3-inch 320×480 touch screen. Taking a close look at the top of the front side, we see what appears to be a front-facing camera as well.

Mobile World Congress is but a few weeks away, where we expect Sony Ericsson to unveil a few devices. Recent trademark filings indicate the company has an Xperia Duo, Xperia Neo, and Xperia Play on the horizon. Each sounds like a phone at this point with the Play possibly being the long-awaited PlayStation Phone. 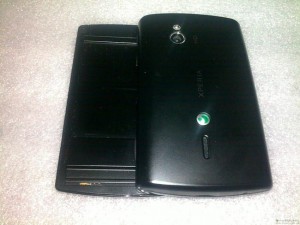