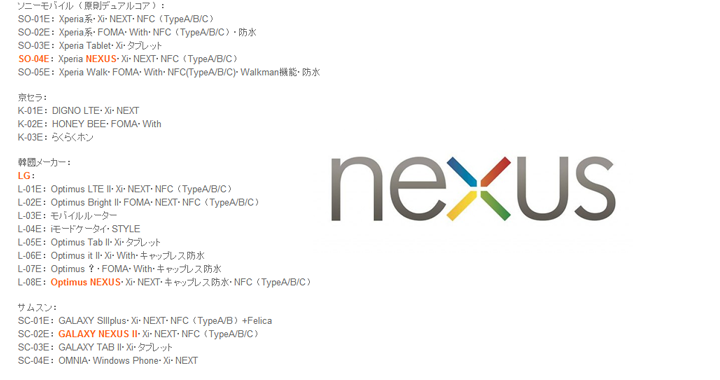 If past history is an indicator, the next Nexus release should be arriving in the late fall or early winter.  As such, we ought to be getting a slew of rumors and details for the next “Pure Google” experience.  Such was the case this morning with the word of a “Superior” Samsung Galaxy Nexus successor.  Before the ink had dried on our post we learned that Sony and LG have some Nexus goodies in the work as well.

Tech site AndroidNoodles (translate) is advising that Japanese carrier DoCoMo is expecting Nexus releases from Samsung, LG, and Sony.  Rumored names for the devices are exactly what you would expect out of all three, in the Galaxy Nexus II, Optimus Nexus, and Xperia Nexus.  There’s nothing else to share at this point beyond the names but it’s exciting nonetheless.

It doesn’t surprise us to see multiple Nexus models rumored as we expect up to five of them, maybe for November 5.  With Android set to celebrate its fifth year anniversary, consumers may have some rather fun stuff to look forward to at the end of the year.