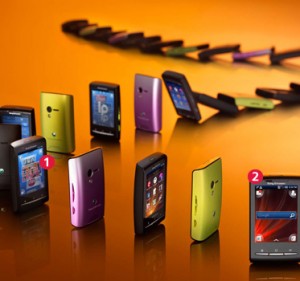 Canadian wireless provider Rogers has accidentally let slip that they will be offering the Sony Ericsson Xperia X10 Mini and Mini Pro.  Again.  This marks the second time that Rogers has inadvertently leaked information indicating the two tiny phones are coming.  They have yet announce anything official concerning the devices but these two goof-ups have me thinking it has to be close.

Earlier this month, the guys over at RGB filter happened to find the handsets listed on the Rogers on Demand mobile (ROD Mobile) app.  Rogers moved quickly, pulling any and all references to the two phones.  So what happened this time? Rogers’ official tech magazine/website URmagazine shot out a tweet making reference to them.

Heading to the website one is greeted with an article on the handsets and spills all the great details.  Jusdging by the associated image, customers may have their choice of colors when the phones arrive.

This might be a little tougher to retract than the last time.  Then again, maybe Rogers isn’t going to make any formal announcement this time around.

Respect knuckles to RGB Filter once again for the tip!

Motorola announces multitude of updates, including “KitKat sweetness” for Canada and Australia