Yapper, they clever app making studio that claim to be able to make any app in any shape, size, or function, have been working for awhile on some really great stuff for Android. They’ve been responsible for more than a few popular apps recently, and now they are teaming up with Best -Selling Children’s science author Seymour Simon to make an app that allows you to buy his books right from his app! 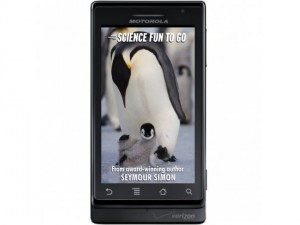 “Science Fun to Go”, Simon’s Android app, will serve as a “go to” mobile destination for up-to-date science news, in-depth coverage of all types of topics, exciting video, online quizzes, plus preview and purchase of mobile books from Seymour Simon. It’s geared for all ages, with a large majority of his literary work at your disposal. Additionally, Simon’s newest work “Silly Dinosaur Riddles” will be available exclusively via his app for the first 30 days it is out. This new release will include new “read to me” or “let me read” features Simon plans to add to all future releases in the app.

The child friendly aspect of the app is great, but it’s also noteworthy that the purchasing of new titles through the app is done within the app, using PayPal. This functionality was released about a month ago, and until recently hadn’t seen a huge push in use. In app purchasing through PayPal is a terrific way to allow fast, immediate transactions that grant the user instant access to content!

Science Fun to go is available free in the Android Market now, so go grab it and check out Seymour Simon’s latest book before anyone in that old bookstore or even Kindle owners will get it!

About Seymour Simon: Seymour Simon is the author of more than 250 highly acclaimed science books (many of which have been named Outstanding Science Trade Books for Children by the National Science Teachers Association), as well as the Einstein Anderson, Science Detective series of fiction books. He is also a creator and the author of a series of 3D books and a series of Glow-in-the-Dark Books for Scholastic Book Clubs as well as a series of leveled SEEMORE READERS for Chronicle Books. His books encourage children to enjoy the world around them through learning and discovery, and by making science fun. He has introduced tens of millions of children to a staggering array of subjects; one prominent science education specialist described Simon’s books as “extraordinary examples of expository prose.” His Collins photo-essay books are now co-branded with the Smithsonian Institution, giving Seymour Simon’s books a special seal of approval from a leading U.S. authority on science and education.