More than a year after we first saw SPB demonstrate their Mobile Shell 5.0 for Android, we finally get to download it on our phones.  Renamed SPB Shell 3D, it looks and feels nearly identical to the video footage from last year’s Mobile World Congress debut.

The new home screen/launcher puts the user’s screens and widgets into a 3D space where they can then navigate them with a simple flick of the carousel.  As much as I loved what SPB did for my Windows Mobile devices of years gone by, Android is a sexier experience out of the box.  Were the price a tad lower than the $14.95 that SPB is asking, I suspect they might sell a few extra copies.  As it stands, it’s a perfect UI for anyone who doesn’t want to root their phone(s).  Further, SPB is hoping that an OEM or wireless carrier adopts the UI for upcoming devices.

Now, let’s get on top of that tablet UI, please. 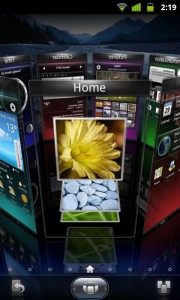