Remote kill switches are coming. They’re controversial due to worries that someone else can disable your phone, but they’re being lauded for their hand in lowering the crime rate. Criminals are much less likely to steal a phone if they know it is going to be useless for resale due to it being blocked. Apple has had this technology for a few years with its infamous iCloud lock and now all phones using the next generation of Qualcomm Snapdragon chips will have it too.

On the features page for Qualcomm’s  2016 chips the case is laid out for these kill switches. They’ll come on the 820 which is tapped for most 2016 flagships, 620, 618, 617, and 430. These cover almost all ranges of phones with the 620 being rumored for mid-range devices like the Asus Zenfone 3 and the 430 showing up in more budget devices and possibly smartwatches.

Qualcomm will have the ability to remotely disable your phone in the case of a theft or compromise. There are safeguards in place that allow only a trusted source to disable your phone so a nefarious source can’t cause you a big headache by remotely disabling it when it’s in your pocket. If your phone is found or returned by the police it can be unlocked and returned to normal use. Qualcomm will supply the ability to do this with their chips, but it’s going to be up to phone manufacturers to customize and implement the feature.

According to Qualcomm, about 40% of all thefts in the United States involve a mobile device. This has prompted eight states, and more coming, to pass legislation that requires kill switches in phones. If phone thefts become a thing of the past, this will open up a lot more resources for police to work on other crimes, and less heartache for users who have their phone taken. With more and more people moving much of their lives onto their phones through social networks, dating, information gathering and media consumption, this should be a win-win for everyone. 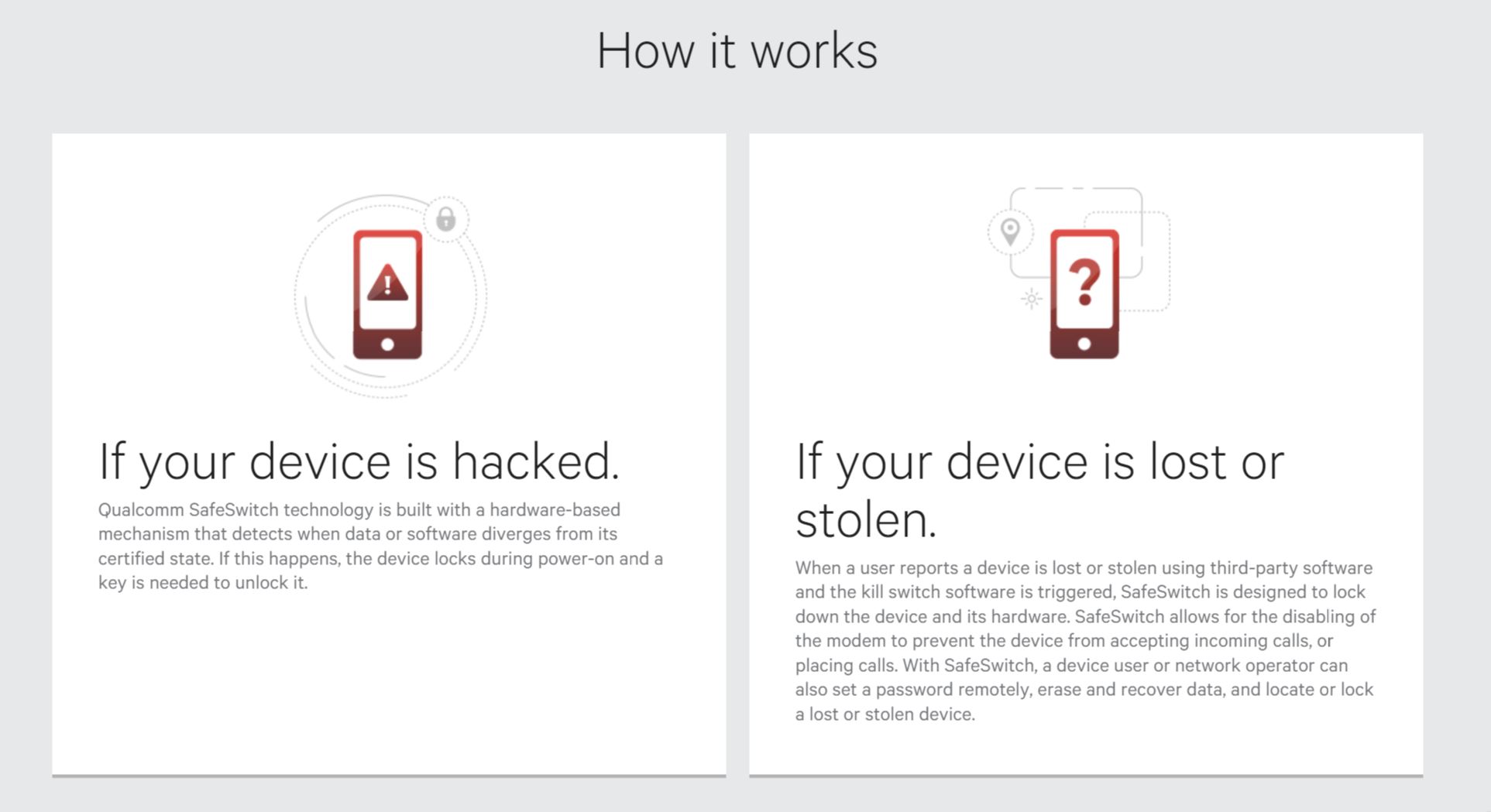 This new feature dubbed “SafeSwitch” puts the future of rooting and bootloader unlocking in doubt, somewhat. Qualcomm states that if your phone is “hacked”, which means data or software that deviates from its certified state the phone will lock on boot-up and require a code to be unlocked. Since acquiring root access generally requires the phone to deviate from the software’s intended boot process, we don’t know how this will affect the ability to root.

If your device is stolen the kill switch is designed to lock down the device’s software and hardware. You’ll be able to do things like lock the modem to block it from receiving incoming or placing calls and messages. You’ll be able to set a password so the thief can’t access your data and you can remotely wipe the device. Presumably you’ll also be able to ping the phone’s location and display a message on the screen on who to contact in cases of a lost device.

Some of these features can be found in phones like the Samsung Galaxy line. You can use your Galaxy account to accomplish some of the same locks in the case of a stolen device. Android Device Manager, which can be used on almost every phone that has Google Play Services, will also let you locate, ping and lock your phone. The difference between those services is that they can be circumvented through software manipulation and Qualcomm’s solution is built into the hardware of the phone.

What do you think of this new kill switch from Qualcomm? Do you think this will cut down on crime? Are you concerned about a government agency or nefarious group somehow gaining control of your phone with these methods? Does this make you more or less likely to buy an Android device with one of these chips in it? Let us know what you think down in the comments.