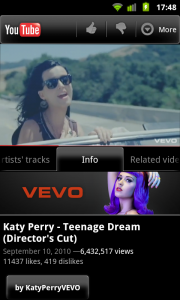 Google’s YouTube team announced Wednesday that a new set of music videos from the likes of Lady Gaga, Bob Dylan, and Kanye West is now available to those using the latest version of the YouTube app, which requires Android 2.2 or higher. Previously, from major-music-label-backed video distributor VEVO, whose YouTube videos all include a short pre-roll VEVO branding ad, were not available via the app. Based on statements later in the announcement, it sounds like enabling those pre-roll ads was the key to adding VEVO’s content to the app:

“Tens of thousands of YouTube partner videos will also now have pre-roll ads appear on the YouTube 2.0 app for Android. This not only expands distribution opportunities for partners like VEVO, but also opens up more revenue to partners distributing their content to mobile.”

In addition to pre-roll ads, Google managed to push several other new features without requiring an update to the app: 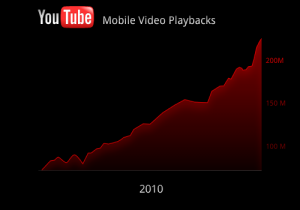 In what’s probably not a coincidence, Vevo launched their own Android app on the same day.

YouTube’s post also included general information about the growth of mobile video in 2010, during which it tripled to more than 200 million views a day.