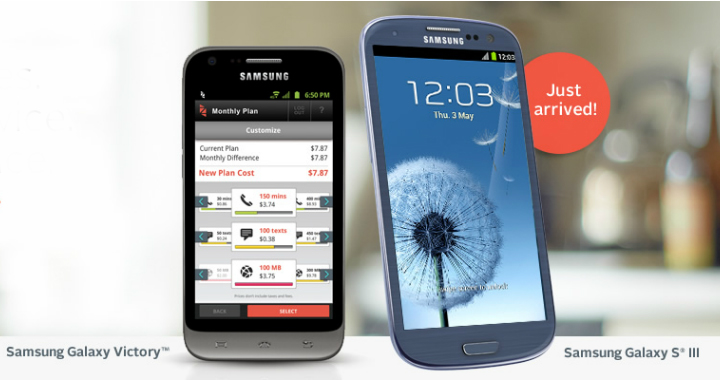 Zact, the wireless carrier that recently debuted on the back of Sprint‘s network, has added another two smartphones to its lineup. This week sees them adding the Samsung Galaxy Victory and Samsung Galaxy S 3 to the prepaid portfolio, both available immediately. The lower-end Galaxy Victory costs $259 while the Galaxy S 3 comes in at $449 without long-term plans.

Redwood City, CA, August 5, 2013 – Zact, the industry’s first smart mobile service provider, continues to deliver on its promise of providing consumers freedom, control and flexibility over their mobile service with the addition of new devices to its lineup.  Starting today, Zact will offer customers the Samsung Galaxy S III and Samsung Victory, in addition to the LG devices already available.

“In our ongoing efforts to provide consumers with more choice, we are excited to add iconic Samsung devices to the Zact smart mobile service,” said Greg Raleigh, founder and CEO of ItsOn, parent company of Zact. “The addition of the Samsung S III and Victory will introduce Zact’s radically affordable and a highly customizable service plan to a broader audience of smartphone users.”

Zact’s customizable smart mobile service was announced May 13, 2013 and became available to the public June 6, 2013.  With Zact, customers eliminate the need for complicated pricing schemes and lengthy wireless contracts.  Customers can easily and quickly select almost any increment of voice, text and data independently of one another.  Plans are adjustable right from a Zact-enabled device. There’s no need to worry about unused minutes or data with Zact’s Never Overpay Guarantee since money is credited back to a user’s account if they’ve bought too big of a plan and there is a smaller one available. With Zact, any plan is sharable – there is no limit to the number of Zact-enabled devices that can be added to an account.  Outside of a nominal $4.99 line charge per each device, there are no additional fees and no need to buy a separate plan.  In addition, built-in parental controls let users easily set curfews, and restrict apps, browsing and contacts on a child’s phone right from the parent’s phone.  It’s like having a remote control over the child’s phone.

About ItsOn
ItsOn was formed by world leading pioneers in the wireless field to fundamentally change how mobile services are delivered and consumed. ItsOn created the Smart Services™ revolution four years ago with a cloud-based software solution to help mobile service providers enhance their network by enabling more flexible and dynamic service delivery options.  ItsOn introduced its direct to consumer service, Zact, to create the industry’s first smart wireless service with direct control and flexibility right on the device.  The company is privately-held and headquartered in Redwood City, and is funded by Andreessen Horowitz, Ag Investors, SV Angel, Verizon, Vodafone, and Best Buy. For more information, please visit www.itsoninc.com.