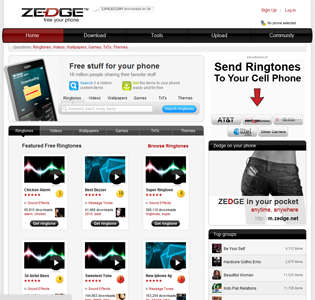 Those of you who have been in the smart phone game for more than a few years are sure to recognize the name Zedge.  Generating more than 4 million daily downloads, it’s safe to say someone knows about their wallpapers, ringtones, themes, videos, and more.  My first experiences with the site came about four years ago when I was looking to spice up my T-Mobile MDA.  Now that I have an Android handset and spend my days and nights writing about the platform, I have found plenty of great sites, services, and apps to customize my phone.  Having said that, I think I’ll be spending more time with Zedge and their upcoming initiatives.

Zedge has been studying not only the Android Market, but the crop of alternatives that have sprung up over the last few years.  They have concluded that they could bring a valuable service to both consumers and your typical mobile developer.  Typical in this case is read as a small team of a guys who work out of a basement or garage.  In other words, not companies like EA or Yahoo! Zedge feels there is no singular service that works well for both developers and customers.  Quantity of apps has trumped quality and models like bid-based promos and cost-per-click have built a broken system.  Killer apps and games get lost in the shuffle as bigger outfits come in a pay for exposure.  The little guy is having a terrible time getting recognition.  I find it ironic that this is exactly the opposite of what I thought Android would provide as a platform.  Zedge aims to fix this with their new App Discovery Network.

Thanks to its massive scale and comprehensive data, Zedge believes they can provide a real value to Android users while at the same time, rewarding developers with discovery.  The system is simple: One product with pricing based on company size.  The service is billed as a flat monthly fee which can be canceled at any point.  To sweeten things a little bit, Zedge is offering a 10-day trial to see how things work.  Ranking is done by users and cannot be adjusted by waving money in anybody’s face.

Zedge will be picky when it comes to letting developers through the gate, something I personally admire.  Mass production apps, soundboards, and apps that simply redirect users to a mobile website will not make the cut.  Zedge will not host apps but they will route them to the Android Market for downloading and installation.  The potential exists for alternative destinations but that has not been decided at this point.  Down the road, they also plan to allow third parties to use the apps catalog from Zedge which will, in turn,  increase exposure and distribution to developers.  As Zedge puts it, the service will require minimal efforts and maintenance from the developers.

Zedge wants to approach their new system like any wise developer or service would, with a beta test.  They are ready to kick things off and are looking to the development community for help.  To help attract potential developers, Zedge is giving away a limited number of beta invites.  Should you decide to test the waters, you’ll be rewarded with 3 free months of service once the doors open.  Let me put it this way – If you are a smaller sized Android development team looking for exposure, you will want to sign up for the Zedge discovery network. These guys know a thing or two about delivering content and providing consumer value.  Now it’s time for developers to get the same value.  There is currently a limit of 50 invites but that will expand with interest. Once you get there, the invitation code you’ll want to use is myapponzedge.

We were approached by Zedge to help in launching their App Discovery Network and I was only too pleased to say yes.  As much as I admire the Android Market and its growing number of alternatives, I am excited to see what Zedge brings to the table.  Perhaps they can do a better job of leveling the playing field.