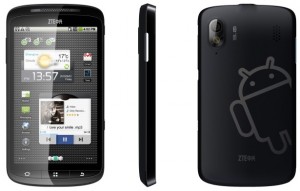 Chinese handset maker ZTE has pulled the curtain back on three new Android handsets today, one of which we saw at CES last month.  Announced at Mobile World Congress in Barcelona, these phones are expected to debut later this spring.  Each model is slightly different from the next with varying flavors of Android and hardware, designed to speak to specific demographics.  While none of these are expected to come stateside anytime soon, it’s worth pointing out what today’s new devices look like.

First up is the Android 2.3-powered Skate.  Featuring an 800MHz processor and 4.3-inch screen, this Gingerbread device also offers a 5-megapixel camera, as well as support for A-GPS, Bluetooth, and WiFi.  To help offset the lower processor speed, the Skate will carry an Adreno 200 GPU to help boost the graphics end of things.

The second device, the Amigo, features a a sliding QWERTY keyboard, a 3.5-inch touch screen, and runs Android 2.2 under the hood.  According to PhoneScoop, the phone’s plastic feels good in hand and does not come across as cheap.  Look for this one to land in the pockets of cute and fashionable teens when it arrives.

The Blade got its unveiling back at CES in January where we first learned of the stock Android 2.1-powered touch-only phone.  The 3.5-inch touch screen, a 3.2-megapixel camera and your other entry-to-mid range specs.  The last we heard, ZTE is hoping this will be one of the first of their smart phones to come to the United States.