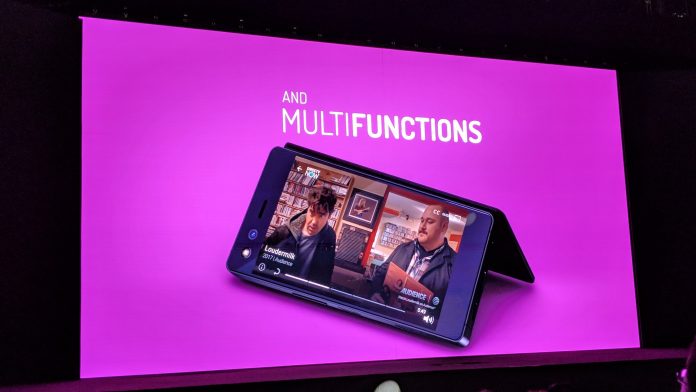 ZTE today at a press event in New York announced its latest smartphone, the Axon M. With internal specifications that rival most mid-range and upper end handsets, the device is unlike anything else before. In fact, as ZTE puts it, it’s a “category defining” product that looks to change the way we interact and use our phones.

As is usually the case with most major phone announcements, attendees were told and shown how the industry has stalled over the last few years. Whereas it was pretty easy to tell one model from the next, today’s devices are “differentiated only by the name on the back”. 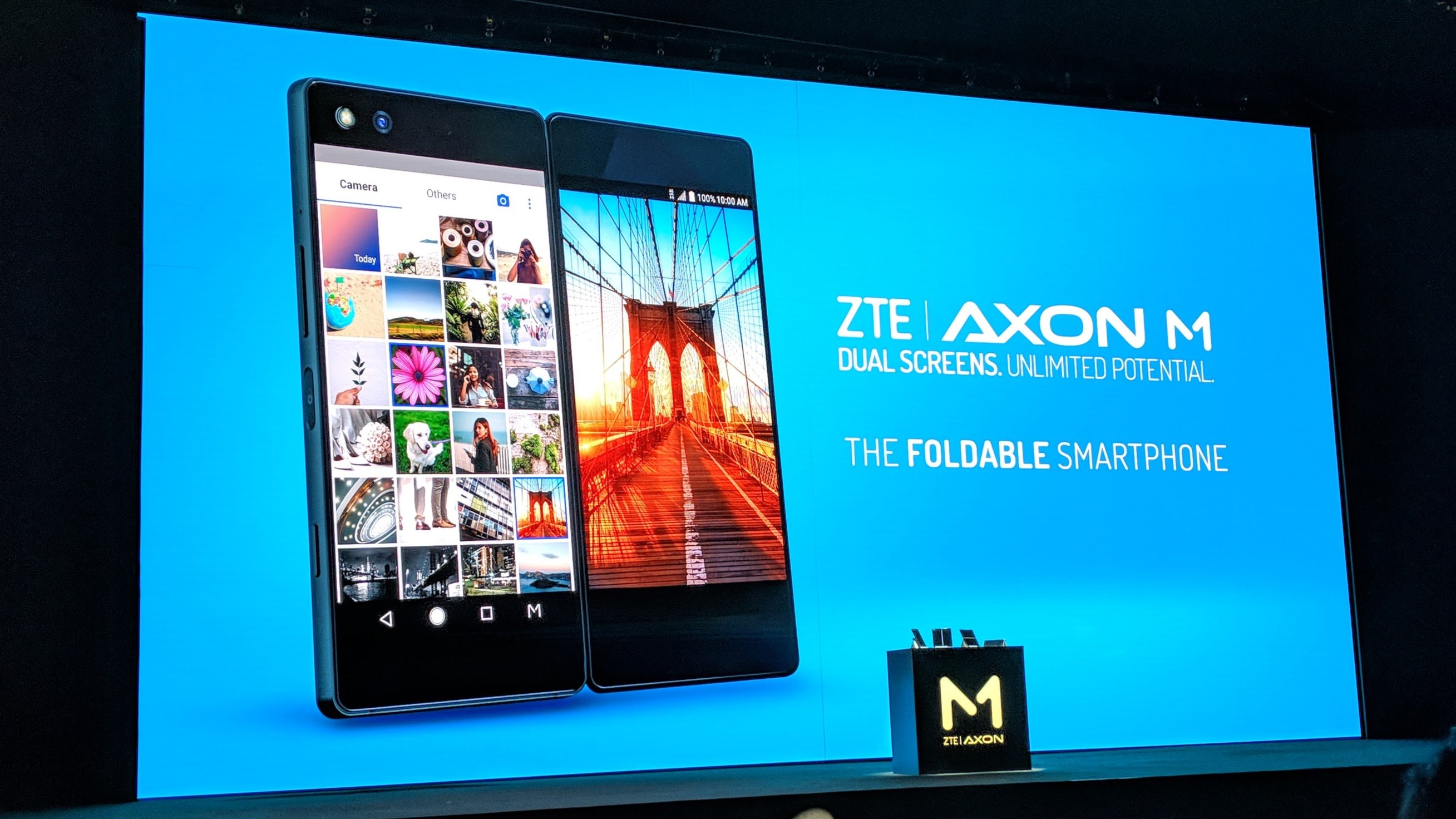 To be sure, there are only so many ways to skin a cat. If you’re going with a touch-only device, it’s going to be hard to innovate. You can only go so thin; once bezels are gone, it’s all edge-to-edge screens.

The Axon M is built with multi-function in mind. It’s even in the namesake: M for multifunction, or Mode. The Axon M offers up a dual screen, folding smartphone experience. Indeed, when it’s closed you have glass screens on both side. Open it up, though, and you’ve got a convertible device. 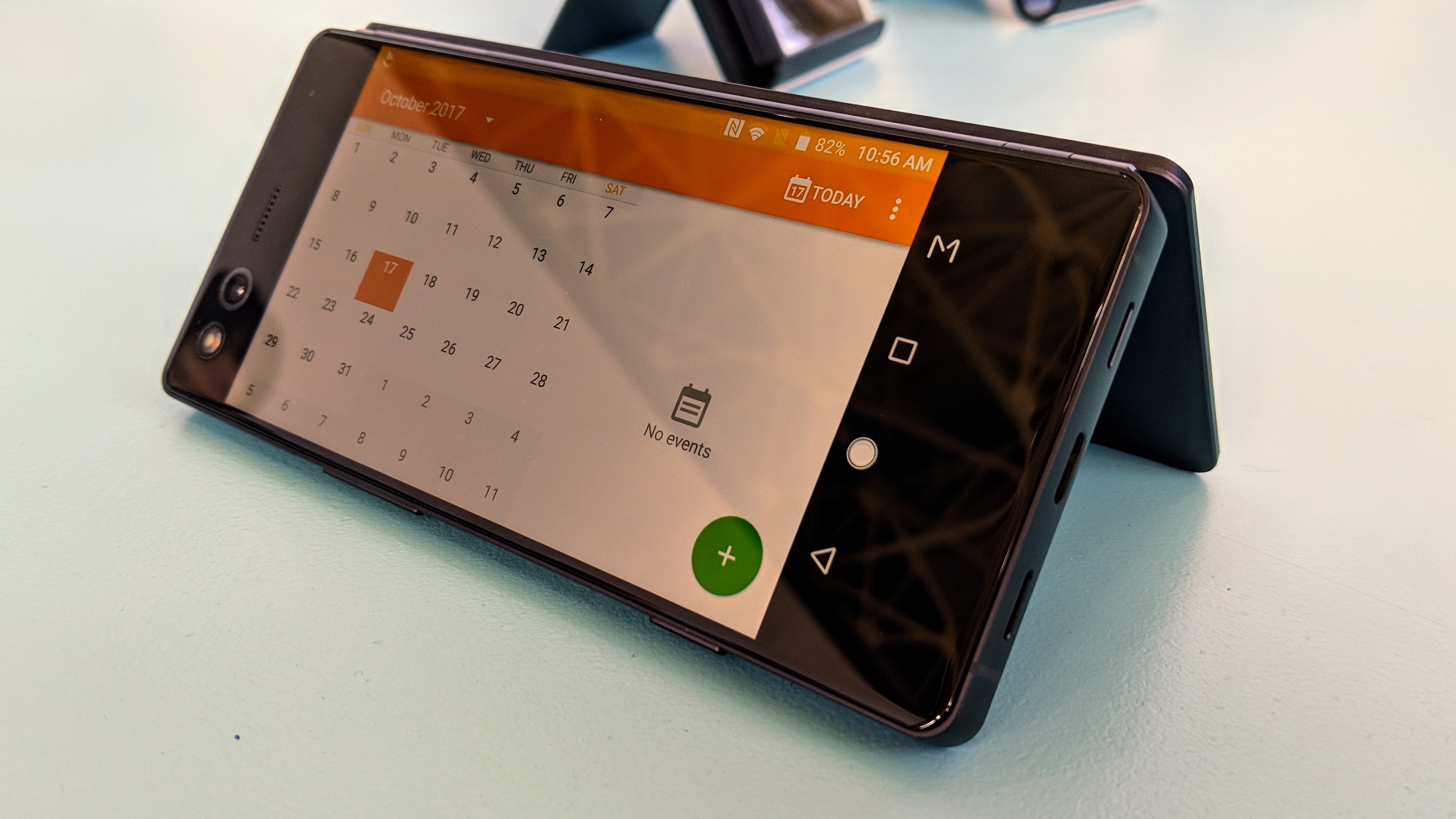 Think in terms of how laptops have evolved into 2-in-1 experiences. Today’s laptops routinely have touch screens with the ability to prop the unit up on its side or back. Watching Netflix on today’s laptops is akin to having a large tent display that’s all about the screen.

The Axon aims to do the same in the area of smartphones. Want to run two apps at the same time? Why not let them go full screen and work side-by-side? Or, maybe you just want to expand your Gmail experience so that you can type with a larger, on-screen keyboard. Have a game that’s turn-based? Why not set the Axon M up with screen mirroring so that two players can see, and interact, with the same image?

The Axon M is like having two separate 5.2-inch screens that can be put together to create a 6.75-inch image. That’s tablet sized stuff, to be sure, but it does have a thin line running through. You won’t notice this so much when running separate apps but it’s quite obvious when expanding an app to full size.

With multiple modes to choose from the multifunction and business use case seems endless. How convenient will it be to have both the calendar open and email open at the same time? Wouldn’t it be great to have your Google Doc up with Slack, without having to hop back and forth? 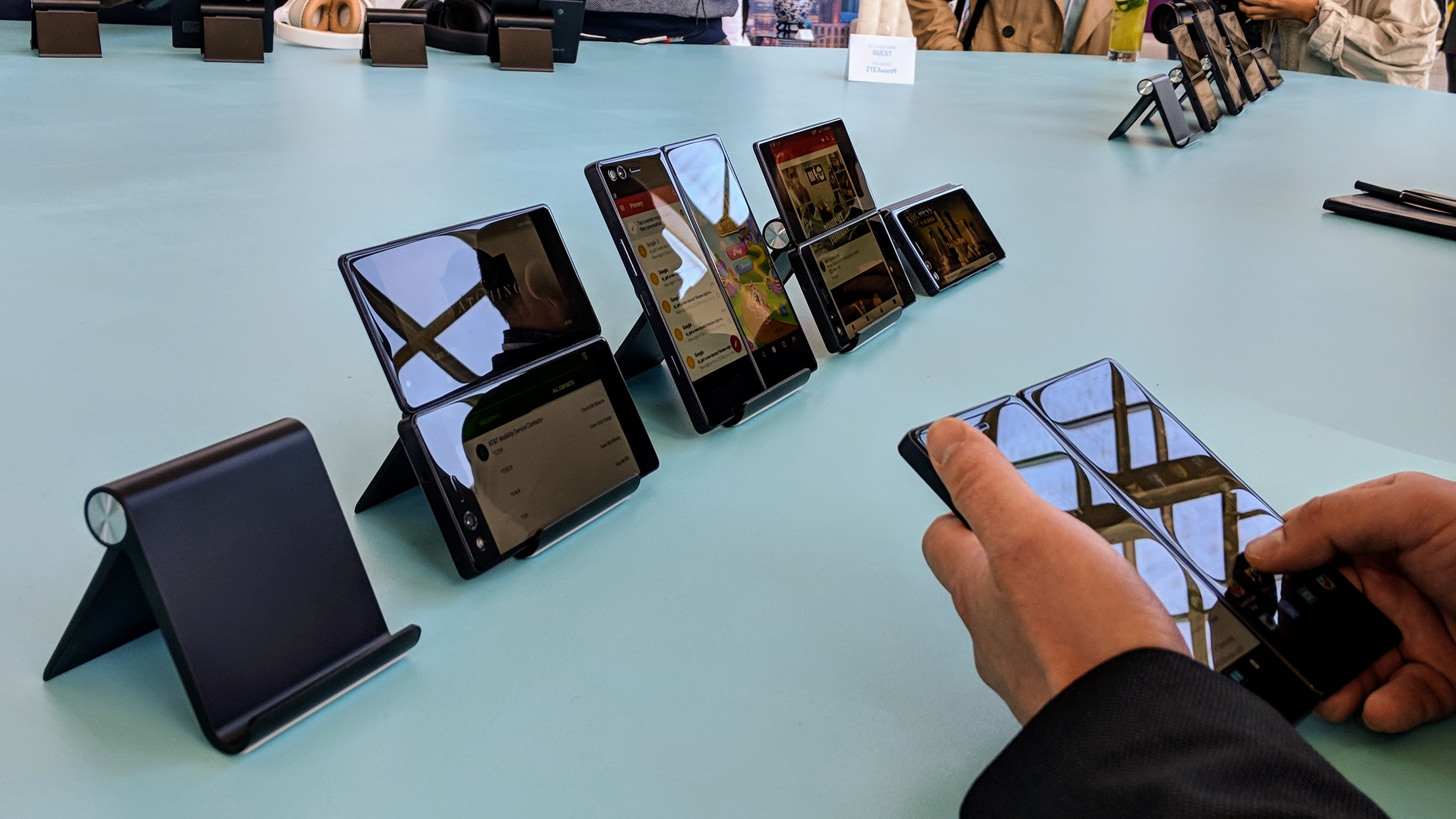 Key hardware details include a Qualcomm Snapdragon 821 processor with 4GB of memory and 64GB of storage. A microSD card slot allows for extra space, providing for up to 256GB of additional storage.

In terms of cameras, the Axon M has one 20-megapixel sensor that works for either the front or the back. This depends on which mode you operate the device, but all pictures benefit from the f/1.8, phase-detection autofocus, image stabilization, and dual LED flash.

ZTE has partnered with AT&T in the United States where the carrier will offer it for $27.14 per month over 30 months. With an all-in price of around $725, it’s not an inexpensive device. Specs are solid, but they are not top of the line.

Overseas, the Axon M will be offered with other carriers as part of partnerships. It is unclear at this point whether an unlocked model will be sold. Further, we’d like to know if there are universally unlocked or GSM-only versions.

Speaking of questions, we’ll have to wait a few more weeks before this phone finds its way into the real world. Will users flock to it? I don’t think so. For one, people aren’t all that keen on exclusive deals. Also, it’s priced toward the high end. It could be a tough sell to convince people to try a brand like ZTE when Samsung, Motorola, LG, and Google have phones in the price range. 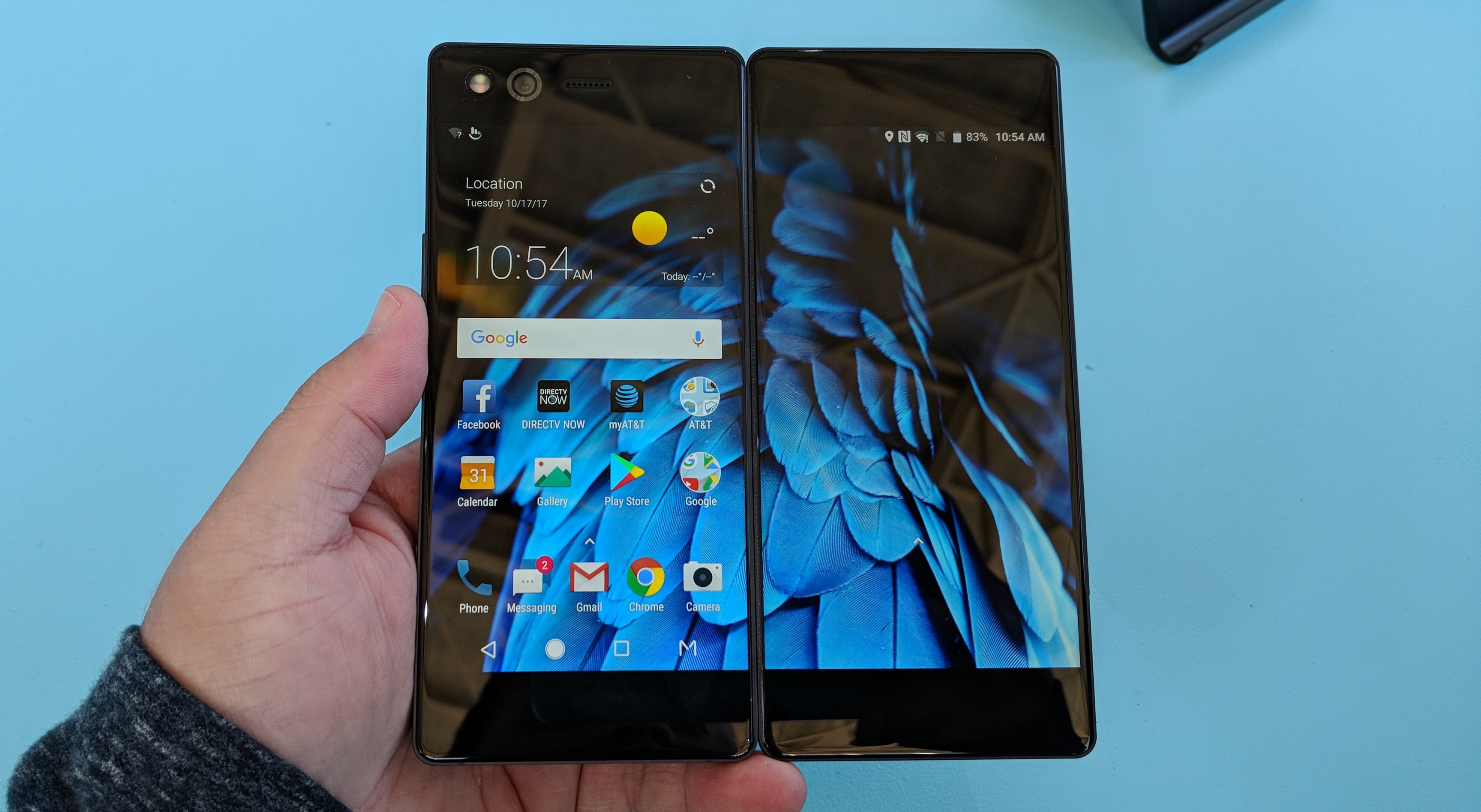 Although ZTE was quick to point out that all apps will work with the Axon M, it did place some emphasis on the developer tools available. The reps I spent time with today were not quite able to articulate the benefits of optimizing for the Axon M and other, future dual-screen phones. Will it be exclusive to ZTE? Will it be shared with Google and others in the Open Handset Alliance?

Ask yourself if you like the idea of placing your phone’s display on the surface of a table over and over. Sure, there are protective coatings and protection to keep from scratches and scuffs, but life happens.

Because of the way in which the Axon M is designed, you’ll be setting the phone on its back-side glass. I was advised that cases and accessories would be announced in due time, but we weren’t shown how that might look or work. As such, the phone is all screen when closed. 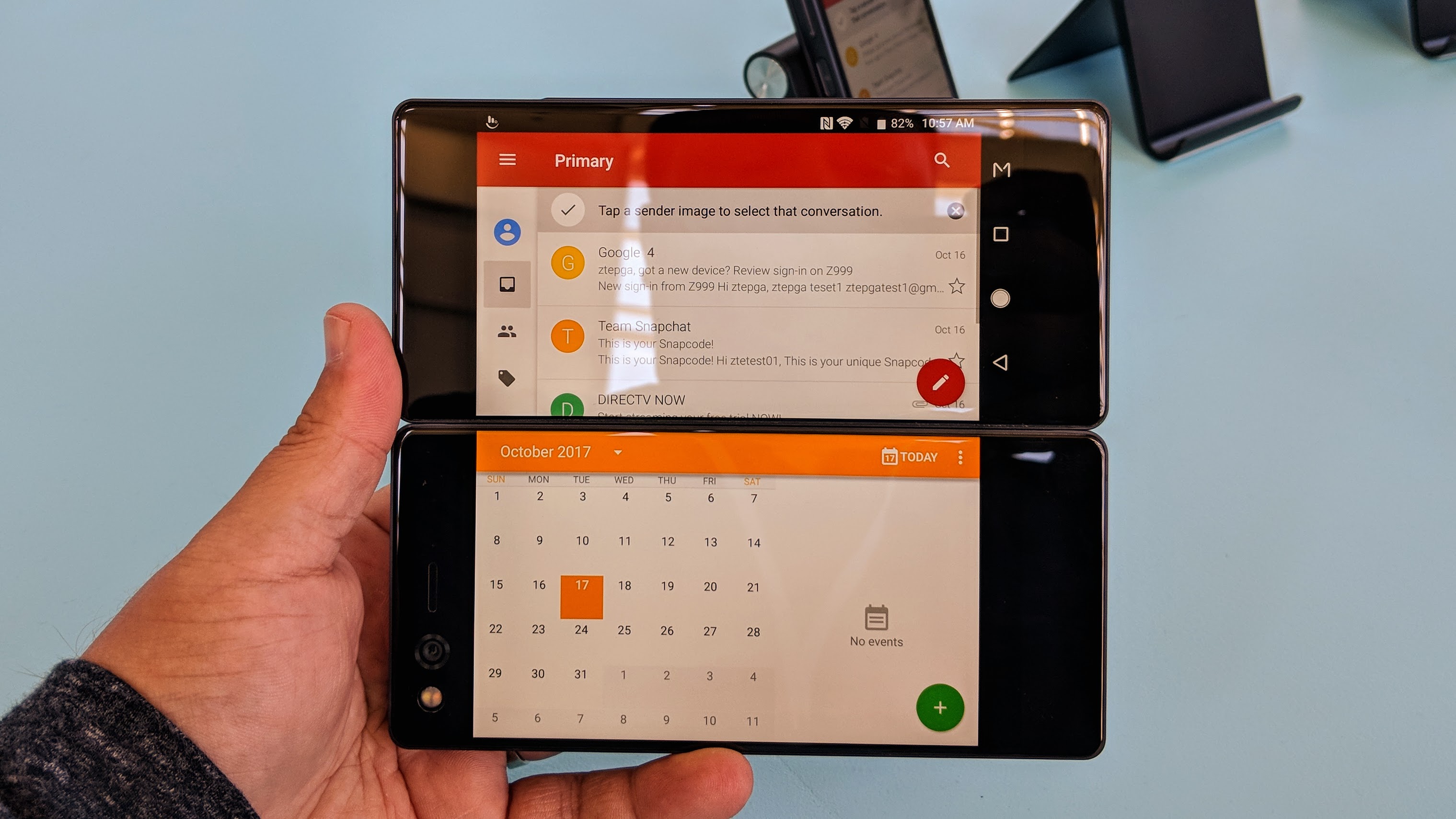 It’s hard to imagine the Axon M will be efficient on battery. Should you open it up and take advantage of the two screens on a regular basis, you run the risk of chewing through battery twice as fast.

The phone includes a non-removable 3,180mAh power source. That’s par for the course in a phone with these specs — on a single screen phone. But, because of the Nintendo 3DS-like form factor, we can imagine getting about half the life out of it that we might normally see. To its credit, the Axon M does have USB Type-C with Quick Charge 3.0, so it shouldn’t take all that long to power back up.

We’ve seen different phone makers throw secondary display ideas at the wall for years. And while LG, Samsung, Kyocera, and others have each tackled it in varying manners, none of them has been a runaway hit.

At one time it required developers to put in extra work to leverage the capabilities of more real estate. Today, though, things are much smoother and should work out of the box. ZTE has bold ambitions with the Axon M and promises it will be a great experience with no additional work required by developer or user.

In the few minutes I spent with the Axon M today I was impressed with the build quality and materials. The phone was angular and austere, feeling more professional than consumer-friendly. Perhaps this was a design choice. Either way, it felt like a finished product created by a team looking to blaze a new path.

I could easily see myself using the two screens for multi-tasking, especially when holding conversations. All too often I find that I’m chatting or messaging while doing other things. I suspect this would be great on a device like the Axon M. Moreover, it would be nice to have a larger experience for pounding out emails or using productivity tools. 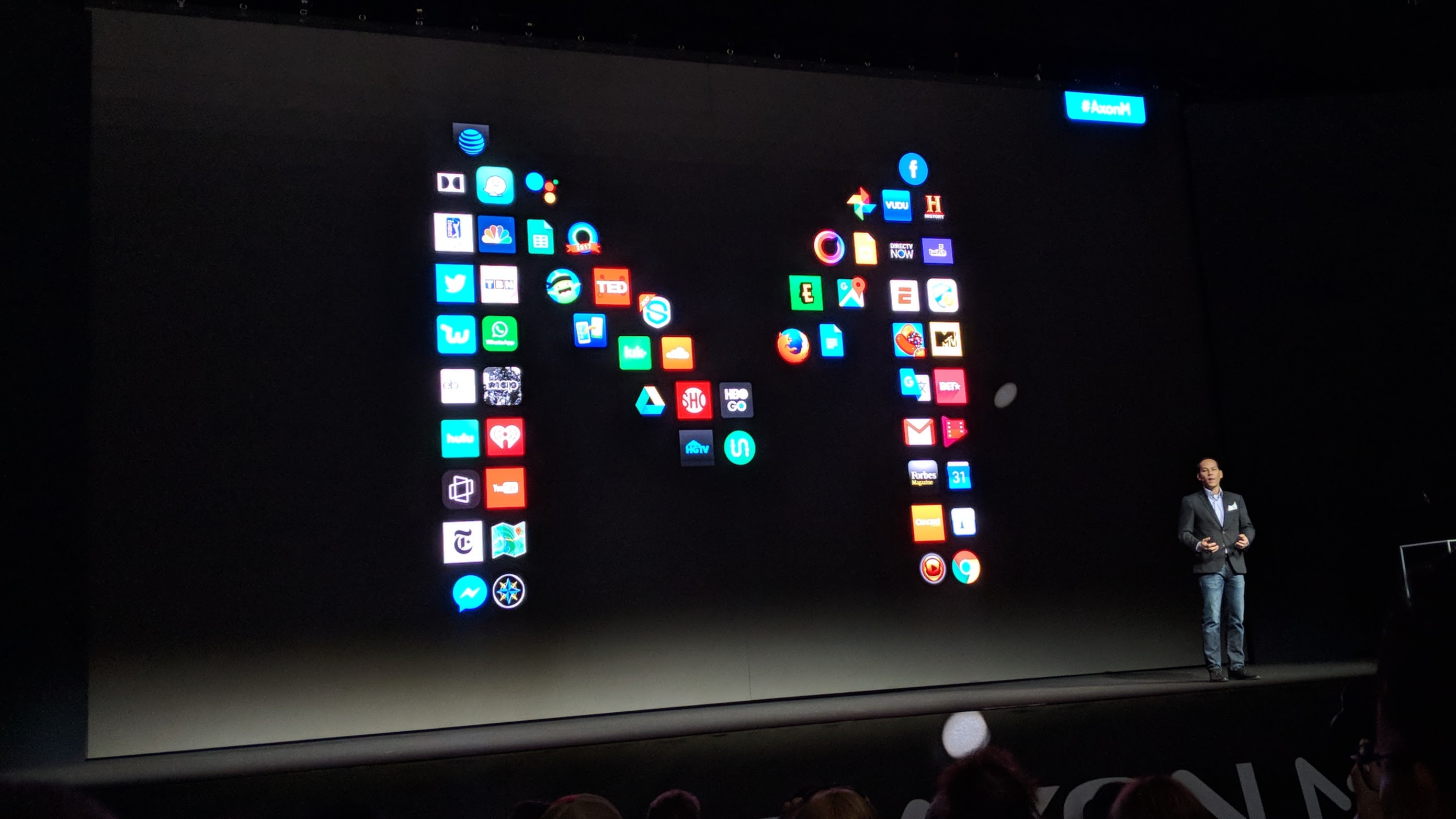 The problem, though, as I see it, is that I’ve become conditioned to dealing with one screen for nearly a decade. I, and millions of others, rely on the familiarity and capabilities of Android on a 5-inch (or so) screen.

As much as I might enjoy kicking the tires on an Axon M, I feel like I would be able to leave it behind. This also doesn’t factor in the $725 price tag and the idea that I’d have to switch to AT&T. I wonder if I’m the only one giving pause to the idea. Don’t get me wrong, I love the ideas of the device and would appreciate it if I became reliant on it. But, as it is, it’s “wait and see” for me.