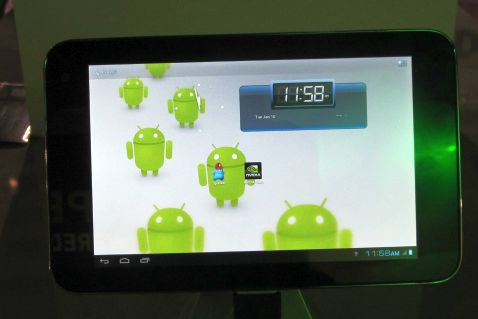 We recently reported that ZTE was planning to launch a Tegra 3 tablet with ICS, codenamed T98. Now at CES, Nvidia is showing off the tablet, and telling the world that it comes with a 7-inch crisp display with a 1200 x 800 resolution, Tegra 3 processor, and it’s rocking on ICS. It also comes with 16GB of internal storage, as well as a MicroSD card slot.

With this tablet, ZTE hopes to become a big competitor for other Android giants, at least in the U.S. As ZTE is a Chinese brand and it offers good devices on cheap rate, I have a feeling that if ZTE is launching their device in the States, they’ll launch it with a low price tag. It’s also worth noting that this tablet may be the tablet we saw with Sprint branding passing through FCC. Nothing else is known about the device at this point, but we’ll keep digging for some clues.

So what do you think about this ZTE 7-incher? Personally, I’m eagerly waiting for this Android tablet to hit the U.S. Anyone else? Feel free to drop a comment below!