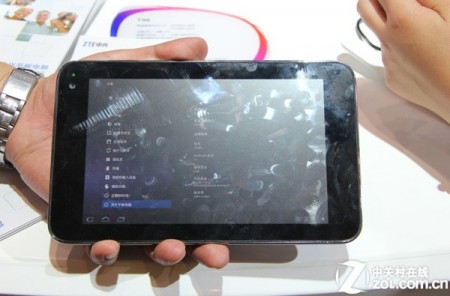 A new 7-inch tablet from ZTE has surfaced in China bearing some rather interesting details. Take a look at that image up there at the top; It’s the first tablet found running a Tegra 3 chipset. Specifications for this guy include a 1280×800 resolution 7-inch display, 1GB RAM, 16GB internal storage, 5-megapixel camera, and 2-megapixel front-facing camera. Oh… and a quad-core 1.5Ghz processor!

Although a release date has not been whispered yet, Hong Kong and Taiwan will be among the first markets to receive this T98 tablet. We’ll most likely not see the tablet hit the United States anytime soon as ZTE has next to zero presence. Then again, a Smart Tab 7 was recently found in the FCC. Maybe they’re ready to take the US by storm! Additional specifications for the T98 include Android 3.2, a 4,000 mAh battery, and an overall thickness of 11.5mm.

Our gut tells us that we’ll see something out of Motorola, Samsung, or HTC as the first Tegra 3 tablet. It’s tough to imagine the bigger guys getting scooped by a player like ZTE. 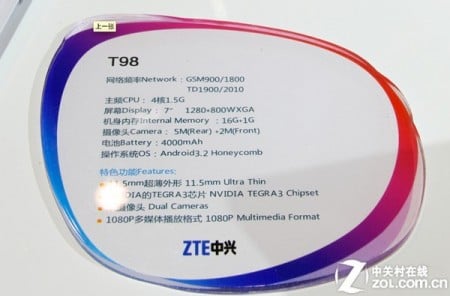