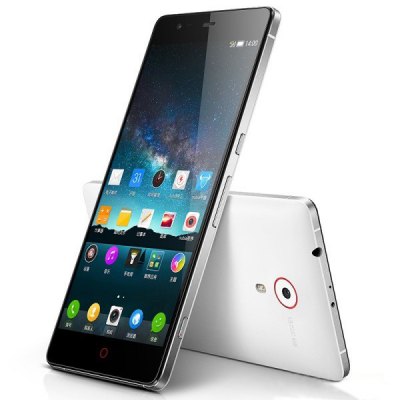 Another phone coming out of Gearbest is the ZTE Nubia Z7. Unlike that other manufacturers, ZTE is one of the more well known Chinese OEMs.

As a matter of fact, ZTE is the official sponsor of different NBA basketball teams. Last I checked, they sponsored the Knicks and the Rockets.

The Nubia Z7 is a high quality device built by ZTE. Not only does it look great, but it also runs great. With a Snapdragon 801 and Adreno 330, the Nubia Z7 doesn’t skimp on much

Sure, it has last year’s processor, but that isn’t necessarily a bad thing.

The Snapdragon 810 has been said to have serious overheating issues, and the Snapdragon 805 and 808 are more minor updates than a big overhaul.

Just everything about this phone is beautiful. You have a beautifully designed phone with a beautiful display.

With that 2k display, you can really see all the detail captured by its 13-megapixel camera. The camera is equipped with a flash and auto-focus just like any other high-end phone out there.

On the front of the phone, you can find a 5-megapixel front facing camera for all the selfies you could want.

Along with all of those beefy specs, the ZTE Nubia Z7 also packs the following array of sensors:

In addition to all of those sensors, the Z7 also has a GPS just like any other phone in existence. Then you also get Bluetooth 4.0 along with it.

The only thing that this phone is lacking is a microSD card slot and a removable battery.

You will be stuck with 32gb of internal storage along with 3gb of RAM. The 3100mAh battery should be plenty to last through the day.

You will be stuck on a skinned version of Android 4.4.4 for the time being, but I have heard nothing but complaints about battery life and stability issues on Lollipop.

The phone, just like with all other phones sold on Gearbest, is factory unlocked for use on any GSM network that supports the following bands.

So what are you waiting for? Go check it out on Gearbest right now and pick up one of your own for $299.99!