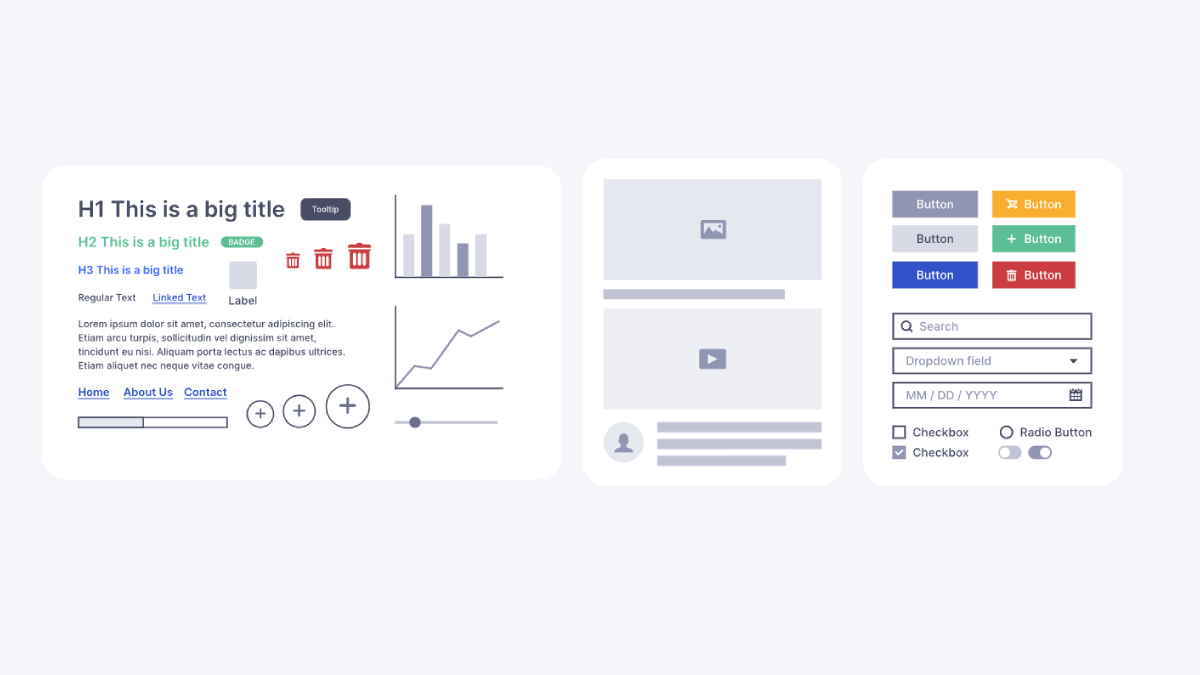 Let’s be candid with ourselves; with a simple pen and paper, anyone can DIY their site or app wireframe.

With the picture of the site/app functionalities in your head. All that remains is the sketching of the ideas. “This will be the first page, if a user clicks this, they will see this…blah blah blah.”

But let me tell you why you won’t follow that route.

Because you know the output would be full of mistakes. Most likely, your drawings will be off the mark, and you’ll end up confusing the designer.

Not to mention the number of hours you’ll waste trying to get the right sketches.

These, and many other reasons, are why people embrace the idea of using wireframe tools – ready-made tech applications that can sketch awesome wireframes from scratch.

What is the Zen Wireframe tool?

In simple terms, Zen wireframe is a simple wireframe tool that lets you create low-fidelity website wireframes and app mockups in just minutes.

If you’re looking to draw out clean, explanatory sketches for your websites and apps, this is the tool for you.

Instead of carving out websites pre-design layouts on pen and paper, this awesome tool lets you do it digitally and in a matter of minutes (not hours).

The result? You get a detailed breakdown of your site’s main features and user flow. Looking at the wireframes you cook up with Zen, you get a straight-to-the-point idea of the site’s functionality before handing it over to a designer.

What does low-fidelity mean?

While defining Zen flowchart, we mentioned the phrase low-fidelity. For people who aren’t used to wireframe tools or who are just trying their hands at wireframes in general, this may cause a stare. So, let’s spell it out for everyone.

Low-fidelity wireframes, or low-fi wireframes as they’re known for short, are quick sketches of web layouts featuring design elements in boxes and lines. In a paper-and-pen world, low-fi is what you would have called a black and white representation of ideas.

The reason they’re called low-fidelity is not because they’re low in quality. Far from it. In fact, they’re the simplest wireframe style you’ll ever come across. If anything, they make your life easier.

They’re called low-fidelity because they pale in comparison to Medium to High fidelity wireframes, which are more complete representations of the end product.

So far, we’ve talked about what the Zen wireframe is. Now, let’s take a look at some good points scored by this tool.

While other wireframe makers give you a workspace to create your wireframes, Zen actually makes the work easier by providing you with a bundle of templates you can choose from.

What this means is that you don’t have to build your sketches from scratch. Instead, you just select from ready-made templates. According to the Zen website, there are 56+ of these templates available. That means you have so many to choose from.

However, at the very basic level, low-fi wireframes offer numerous advantages over these other ones. At their core, low-fi wireframes bring the graphical pieces and content structure together in a way that’s easy to view and interpret. Zen has prioritized these forms of wireframes because they believe it helps viewers understand the early stage of design.

Furthermore, they show the placement of graphical elements and copy on the screen. What we find particularly impressive about low-fi wireframes is that they can even be developed into more high-fidelity wireframes.

So, in a way, creating low-fi wireframes with Zen is like creating a bedrock for any sort of end product you may have in mind.

A key feature you expect to find in any wireframe tool is the ability to customize the end product into anything you want. And on this front, Zen wireframe has no match.

Zen wireframe makes customization so easy that it’s even possible to upgrade a simple low-fidelity wireframe into more polished developments.

So, let’s say you decide to have a simple sketch of a few black-and-white pages today. You can come back and upgrade that to something colored with extra pages.

One of the traditional challenges of wireframe creation is the issue of time wastage. Whether you’re doing hand-drawn wireframes or simply sketching your site layout on a piece of paper, one thing is certain; you will need a lot of time.

To make matters worse, you may not even reach a reasonable final product in the end.

Challenges like these are what tools like Zen wireframe tool helps you combat. With the Zen tool, you can create almost any type of wireframe in a matter of minutes rather than hours.

Wireframing made for everyone

Unless you’re a fine artist, a graphic designer, a web designer, or just naturally skilled at wireframe creation, it’s more than certain you will struggle to DIY your site wireframe.

This is because the process can be quite technical. For starters, you’ll need to draw out the graphical elements, align the user flow lines, showcase pages distinctly, point out functionalities, and pull other plugs.

How do you do this? Don’t sweat it, Zen wireframe tool is all you need. This tool makes it easy for anyone to create wireframes within the twinkle of an eye.

And that’s not all. When we say ‘anyone’ can create, we mean every Tom, Dick, and Harry. Irrespective of whether you’re a designer or not, have a background in wireframing or not, you can use the Zen tool to make your site sketches.

This is good news for those who don’t want to do wireframes because they feel it’s not worth the cost. Now that you can DIY wireframes using simple tools like Zen, it means you no longer need to hire expensive designers.

What kinds of wireframes can Zen flowchart do? That’s a question we hear every time. And the truth is Zen flowchart has a wide variety of options when it comes to wireframe designs.

For starters, you can make the following wireframes with Zen flowchart.

Zen flowchart encourages teamwork with its wireframing system. Create your sketches and invite team members and clients to view, comment, or edit your work.

Whether you’re buying a product online or off it, it is highly important to consider the reputation of the company you’re buying from.

And on this note, Zen flowchart has a reputation that speaks for itself. With over 1.6 million+ users serviced worldwide, Zen flowchart comfortably ranks atop most providers offering similar services.

Plus, their diversity in diagramming also goes to prove their versatility and expertise. As of now, joining the Zen flowchart community means signing up for some awesome diagramming & productivity tools, including flowcharts, mind maps, wireframes, whiteboards, and many more.

Finally, Zen flowchart is backed by some of the biggest names in the digital service community. Talk about Google, Facebook, Apple, LinkedIn, Spotify, etc.