Yesterday – August 1st – preorders for the Oukitel K8 went live. The latest big-battery-laden smartphone from Oukitel features 4GB RAM, 64GB storage, a 5,000mAh battery, and a 6″ 1080p screen for just $139.99 at AliExpress. The preorder period – and that price – will last until August 19th, at which point the price will increase to $159.99.

The Oukitel K8 is a true mid-range phone, but also sports a Sony IMX135 13MP rear camera – making it a bit better than your average bear. Oukitel shot a video to showcase the K8’s improved camera performance, seen below. Pretty decent, for just $139.99. It’s obvious that Oukitel really wants the K8 to have a solid camera, and it looks as though it delivered.

If you’re looking for a cheap new phone, the Oukitel K8 is the way to go. It’s got solid specs for its price-point, and a big battery to last for two days with ease. As mentioned above, it’s even cheaper right no than it will be at launch – so if you’re planning to check it out, don’t delay. At just $139.99 on AliExpress until August 19th, what have you got to lose? 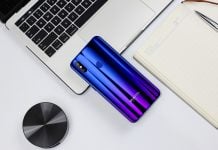