Last week Oukitel announced it was working on a new big-battery rugged phone called the WP2. A successor of the Oukitel K1000 Max, the upcoming device is a tri-proof smartphone. This means the product offers IP68 certification and is also dust-proof and shockproof.

Up until now, we didn’t have any info to share about the specs of the WP2, but this week Oukitel shed some light on the situation.

The company revealed the upcoming phone with come bundling a 6-inch LCD display with Corning Gorilla Glass and FHD+ resolution. Obviously, like the majority of handsets launching today, the WP2 features the modern 18:9 aspect ratio.

The highlight of the device is the 10,000 mAh battery which according to Oukitel will be able to support up to one week of use. What’s more, the device will ship with a 9V/2A quick charger, so that users can recharge the battery faster.

The phone will be offered with 4GB of RAM on board, and either 64GB or 128GB of internal storage. On top of that, the WP2 will also offer the services of a dual camera that will pair a Samsung S5K2PT sensor and a 2-megapixel secondary camera

Unlike previous Oukitel smartphones, the WP2 is going to be the first to feature a fingerprint scanner on the side of the device. The phone will also include NFC functionality, so you will be able to use the device to make contactless payments.

If the Oukitel WP2 has sparked your curiously, you can see how the phone looks like by checking out the video embedded below.

Right now we don’t really know when the Oukitel WP2 will go sale. However, the company announced the start of a subscription activity that will give users a chance to win a WP2 for free, as well as get a presale discount. 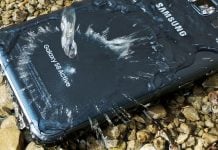